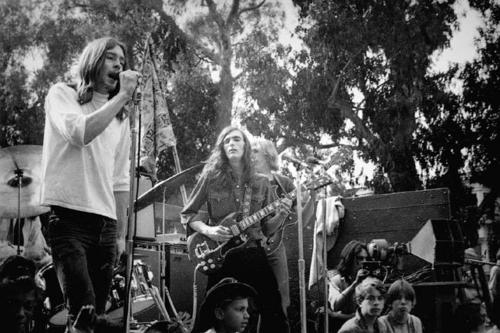 The Yardbirds - Roger The Engineer ( 1966 )
Out goes Clapton and in comes Jeff Beck. The Yardbird's earlier white blues sound is still evident but is now heavily tempered with psychedelia. Lost Woman has a bouncy McCartneyesque bassline and would have fit in nicely on Revolver while Turn Into Earth has a moody choral vocal piece which would later be borrowed by the Animals and the Herd among others. The CD version is made even better by the inclusion of the non LP single Happenings Ten Years Time Ago / Psycho Daisies which offers the Yardbirds definitive psychedelic statement. BUY IT

Les Baxter - The Dunwich Horror( 1970 )
The soundtrack for a long forgotten ( and rather good ) H.P Lovecraft film adaptation. Baxter's better known as one of the originators of exotica, but also had a productive career as a film scorer, with this being the weirdest and most appealing by a long shot. The Giallo soundtracks of Ennio Morricone seem to be the main influence, and this in turn seems to pre-empt Goblin's Dario Argento work. Creepy, often cacophonous and always interesting with plenty of psych elements, and a memorable theme that's reprised often in different forms. BUY IT
Hear a track on this cloudcast.

Lazy Smoke - Corridor of Faces ( 1968 )
Originally only available as a private pressing of 500, this is one regional U.S psych rarity that attained it's reputation very early on, with copies changing hands for three figures already by the early seventies. It's a very basic recording and completely derivative of the Beatles sound circa 1967 right down to the lead singer's Lennon affectations. It's also absolutely wonderful, and offers an alternative view of what the Beatles albums of 1967 could have sounded like if they'd toned down the studio trickery and focused more on guitar. ( Don't get me wrong - I love the sound of those Beatles albums, but alternatives are always interesting ). How Did You Die and Under Skies are the highlights, but the whole album is great and satisfyingly filler free. BUY IT
Hear a track on this cloudcast.

Churchill's - Churchill's ( 1968 )
An astonishingly good album and a total surprise from this Israeli band from the original psychedelic era. One of the very best psychedelic albums recorded outside of the U.S and the U.K with very solid songs, influenced by Cream and the Beatles and some heavy, heavy psychedelia. Occasional use of Israeli instrumentation too ( Bazouki I think? ). They changed their name to Jericho Jones and recorded their next album in London, but had dropped the psychedelic angle in favor of stodgy hard rock by this point. Stick to the original and the best. BUY IT

Black Mountain - In The Future ( 2008 )
Black Sabbath meets Jefferson Airplane on this, the trippiest of their albums to date. Lots of stoner rock still, but many tracks are also deeply psychedelic. Wucan in particular is amazing with it's loping Pink Floyd at Pompeii bassline, and walls of vintage analogue synths which bring to mind Shine On You Crazy Diamond and Hawkwind in their prime. Lots of fuzzy fun. BUY IT
Hear a track on this cloudcast.

Quicksilver Messenger Service - Quicksilver Messenger Service ( 1968 )
One of the best known San Francisco bands of the late sixties, and right up there with the Grateful Dead and Jefferson Airplane. While the following year's live Shady Grove seems to get the most attention, this, their debut studio album seems to be much more focused to me. Their cover of Pride of Man should have been a huge hit and on the longer tracks ( especially The Fool ) the liquid guitar work of John Cippolina is given plenty of room to shine. BUY IT

The Collectors - The Collectors ( 1968 )
One of the most interesting Canadian debuts from the original psychedelic era, this is best known for the side long What Love ( Suite ), which is an expansive and intricately arranged masterpiece. The shorter pieces on side one are more conventionally constructed psych-pop gems with some nice acid guitar, strong harmonies and excellent use of flutes. Check out She (Will-O-The-Wind) for a starter.

Erland & The Carnival ( 2010 )
A totally different take on psychedelic folk, this has a definite sixties garage tinge, and features ex-Verve guitarist Simon Tong. Fans of the Coral will definitely like this. Their cover of Jackson C. Frank's My Name is Carnival is inspired, while originals Trouble in Mind, The Derby Ram and Was You Ever See are all top tunes that sound like they come from the same darkly pagan tradition as the Wicker Man, only performed by Little Games era Yardbirds. BUY IT

The High Dials - A New Devotion ( 2003 )
An ambitious double length debut from this excellent Canadian band on the famed neo-psych Rainbow Quartz label. An excellent distillation of the Beatles, the Byrds, the Yardbirds and more circa 1966, this is one of the most authentic sounding retro psych albums I've ever heard. Rishi Dhir is their wildcard - a fantastic McCartney-esque bass player who's also a dab hand on the sitar. His other band Elephant Stone is pretty flash too. The High Dials other albums have a more contemporary sheen - start here. BUY IT
Hear a track on this cloudcast.

David Axelrod - Song of Innocence ( 1968 )
Axelrod's orchestral, big beat, jazz tinged psychedelia has proven very popular with DJs who've sampled his material extensively and brought him to a wider audience than he originally found in the sixties. Epic arrangements, funky drumbreaks and stinging acid guitars are his calling cards and this shows them all at their best. For a more thorough look at his catalogue click here. BUY IT

Cream - Disraeli Gears ( 1967 )
It seems weird now to think of Eric Clapton as a psychedelic visionary, but there's no doubting this as one of the most psychedelic albums released on a major label by a U.K artist in 1967. Strange Brew and Sunshine of Your Love are the big singles and they're just the tip of the iceberg. Tales of Brave Ulysses shows Clapton's wah-wah mastery, SWLABR is a fuzzy guitar gem, and We're Going Wrong is a moodier downbeat number. BUY IT

July - July ( 1968 )
A predecessor to the unusual prog outfit Jade Warrior, July released just the one album but it's a real doozy and one of the better U.K psych obscurities. Lots of trippy effects on this one, especially on the wonderful single My Clown and the heavily comped Dandelion Seeds, which also has a great guitar riff. There's the occasional light hearted lapse into tweeness ( Jolly Mary ), but this is generally a lot grittier than it's U.K contemporaries. Great. BUY IT

A Monstrous Psychedelic Bubble Vol. 1 ( 2008 )
This is a great double mix CD put together by the Amorphous Androgynous ( Future Sound of London ). Notorious crate diggers, they've managed to seamlessly combine an amazing selection of psychedelia that ranges from the well known  ( Donovan, Hawkwind ) through jazz ( Miles Davis, Mahavishnu Orchestra ) through more obscure recent material. A real eye opener, and a perfect introduction to some stuff you're likely to have never heard before. The Yellow Moon Band cooks. Volumes Two and Three are just as good and even more esoteric, covering everything from Supergrass to James Last.

Susan Christie - Paint A Lady (Released 2006, Recorded Late Sixties)
Christie recorded these demos in the late sixties after her ( awful ) novelty hit I Love Onions. There's some pretty out-there stuff on here, especially the bizarre beatnik drug trip of Yesterday, Where's My Mind? Other tracks are folk rockish, along the lines of Linda Perhacs and Margo Guryan, but with a funky David Axelrod inspired rhythm section and some trippy vocal treatments.  Rainy Day and Paint A Lady are both fabulous. Not too sure about that version of Ghost Riders in the Sky though.
Hear a track on this cloudcast.

Los Shakers - La Conferencia Secreta del Toto's Bar ( 1968 )
Primarily known as Uruguay's answer to the Beatles ( their excellent first two albums are dead ringers for A Hard Day's Night and Rubber Soul respectively  ), they show more of their own personality here with a much more expansive sound seemingly inspired by Pet Sounds as much as it was by Sgt. Peppers. Beautiful arrangements with some excellent horn accompaniments, exotic rhythms and impeccable harmonies. BUY IT


I'm thinking of looking at progressive rock next..... any suggestions for fantastic obscurities that I may not know of before I start putting that list together? Post in the comments section. Thanks.