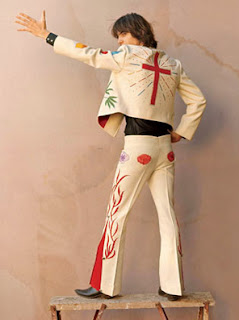 Gram Parsons coined the phrase Cosmic American Music to describe his mixture of folk, country, gospel and rock and roll.  Since then numerous others have taken up the mantle to continue his legacy. Whether you call it Alt-country, Americana, No Depression or the Old Wyrd America, here's a look at ten of the best of these albums released from the first wave in the late sixties and early seventies.

10. Jake Holmes ( 1969 )
A totally under rated gem this. Holmes evolved from mild psychedelia ( he wrote Dazed and Confused, famously 'borrowed' by Led Zeppelin ) to full on country rock as best evidenced here. His back catalogue is treacherously patchy, but if you can find a copy of this on LP you're on safe ground.  Great songs and excellent steel guitars. Recommended.

9. Creedence Clearwater Revival - Green River ( 1969 )
Lots of huge singles on this one ( Bad Moon Rising, Lodi, Green River ), but it's the album tracks which really cook here. Tombstone Shadow and Sinister Purpose simmer away with their dark, swampy voodoo vibe, Commotion is a raucous barnstormer and The Night Time Is The Right Time veers into uncharted soul territory with a particularly strong vocal performance from John Fogerty.

8. Gene Clark - No Other ( 1974 )
After jumping ship from the Byrds Clark released a string of classic solo albums that while neglected at the time, have been re-evaluated and given the respect they deserve since. No Other is the most ambitious and successful of these albums, with huge production values, clever arrangements and some of Clark's strongest songs in Silver Raven, Some Misunderstanding and Strength of Strings in particular. White Light, Roadmaster and With The Gosdin Brothers are all gold too.

7. Brinsley Schwarz - Silver Pistol ( 1972 )
Most well known for writing ( What's So Funny 'bout ) Peace, Love and Understanding as made famous by Elvis Costello, Brinsley Schwarz were a damn fine country rock band in their own right. The Brinsleys cemented their reputation as the English equivalent to the Band with this classic LP. Nick Lowe's title track gets my vote for their ( and his ) best song, and new singer / guitarist Ian Gomm's One More Day isn't far behind. Tight musicianship, earthy harmonies and excellent organ and guitar work are all present and accounted for. English Cosmic Americana is a bit of a mouthful, but the Brinsleys are totally deserving of their place here.

6. The Flying Burrito Brothers - The Gilded Palace of Sin ( 1969 )
Excellent longhair country and some of the best Cosmic American tunes ever recorded right here. Gram Parsons took Chris Hillman with him when he left the Byrds and their shared love of country music resulted in this. Sin City, Hot Burrito #'s 1 & 2 and Christine's Tune are rightly celebrated, but their reworkings of soul classics Do Right Woman and Dark End of the Street are just as appealing.

5. The Band ( 1969 )
The Band are the epitome of Cosmic Americana and this, their second, shows them at their very best. From the rural funk of King Harvest ( has surely come ) to the instantly recognizable Night They Drove Old Dixie Down this is the ultimate musical distillation of the Old Wyrd America.

4. Bob Dylan - John Wesley Harding ( 1967 )
Recorded after, but released before the Basement Tapes, this was the first new Dylan that anyone had heard since Blonde on Blonde and it must have come as a bit of a shock. No one would have expected this sparsely recorded collection of biblical allegories and rambling folk stories, an album unlike anything else in Dylan's catalogue and one of his very best. Backed only by bass and drums and his own acoustic guitar and harmonica, the focus is very much on Dylan's voice here and it acquits itself admirably. All Along The Watchtower is just the tip of the iceberg.

3. The Byrds - Sweetheart of the Rodeo ( 1968 )
The Byrds jumped headfirst into country rock with the addition of Gram Parsons to their line up. The older country crowd were unimpressed with these impudent youngsters jumping on their bandwagon, leading memorably to the writing of the later Byrds classic Drug Store Truck Driving Man, but looking back it's hard to see what they found so offensive - of all the albums on this list this is the most traditional and respectful of the genre. A classic for those with a taste for hard core country.

2. Grateful Dead - Workingman's Dead ( 1970 )
American Beauty tends to get most of the plaudits from the Dead's country rock period, but I prefer Workingman's Dead which is a much more roughly cut diamond. The impeccable harmonies on Uncle John's Band  and rollicking boogie of Casey Jones are smooth as silk and act as a nice counterpart to the grittier lament of High Times, with one of Jerry Garcia's most affecting vocal performances. Highly recommended and not necessarily what you'd expect if you're only familiar with their more psychedelic material.

1. David Crosby - If I Could Only Remember My Name ( 1971 )
One of the most unique albums of the seventies, this is a dreamy multitracked vocal soundscape with impeccable arrangements and heaps of superstar guests ( Neil Young, Joni Mitchell, Grace Slick, Jerry Garcia etc. ) . Garcia shines, with his steel guitar on the wondrous Laughing being particularly tasteful, but despite the huge amount of guests, this is very definitely Crosby's show with tracks like Orleans and Song With No Words stamping his authority on proceedings. An exceptional album, that is totally unlike anything else you'll ever hear.

Wow this seems to have stirred up a bit of controversy. I should point out that this list represents my favorite albums and is intended to represent my views only, and hopefully encourage a few people that haven't heard these albums to check them out.
Lots of people seem to think that Gram Parsons 2 solo albums should be on here, and they're right to a certain extent - they're both great albums ( even though I generally prefer the live versions of these songs from the 1973 live album - more controversy no doubt ). In the interests of diversification however I've left them off so that other artists can get a little coverage. And I prefer Sweetheart and the first Burrito's album to those albums, so they are here to represent his excellent body of work. That's just a personal preference.
As is my decision to put David Crosby at number one - the other decision that's riled many. It's my favorite album on this list so it's exactly where it should be.
I'm always interested to hear other's lists so let me know what your top ten would be in the comments section, and remember it's all in good fun.
I'll be interested to see what I've missed.
I'll be looking at the younger generation soon, It'll be interesting to hear what people think of those choices.