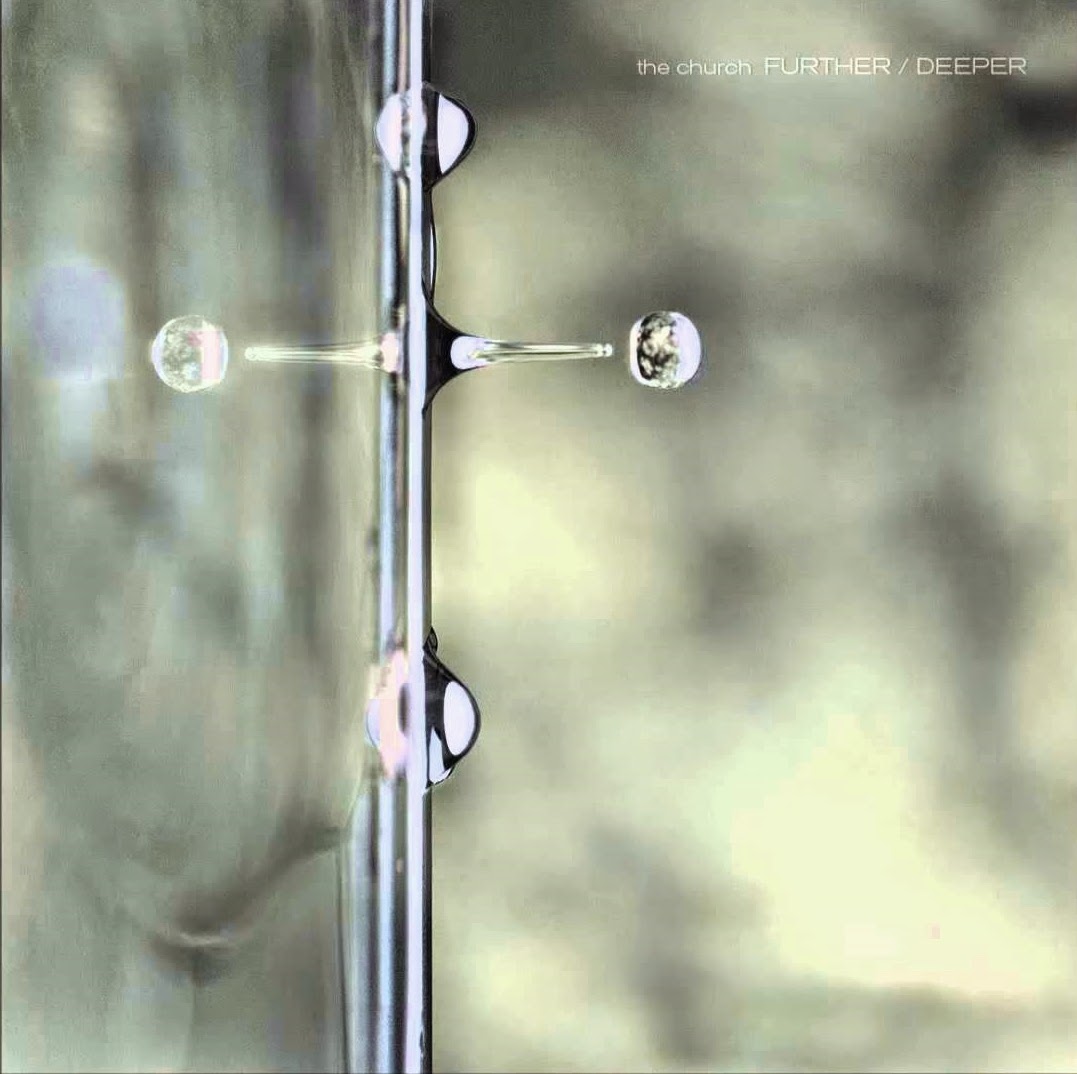 Back in 2009, Australia's The Church released "Untitled #23", a fantastic record which I loved then, and I still love now. I wondered how they were ever going to follow up such an outstanding album. Well, here we are in 2014, five years on, and here's the spoiler: They've delivered the finest record of their long and brilliant career.

I've listened to this around three dozen times now and, honestly, I am still hearing something new on each listen. This is a very complex record. It is clear that a lot of thought and practice went into making this masterpiece. These songs are expertly crafted. But, there's so much more going on here than technical prowess and fine musicianship. There's some real magic. There is no question that this will stand out for years to come.

"Vanishing Man" starts off with an eerie, mysterious beginning, and pretty soon it is unmistakably The Church. Steve Kilbey's voice (which has always been terrific) is in fine form, but what really shines is his delivery. As always, the guitars are superb - beautiful echoes weaving in and out, creating the perfect backdrop for Kilbey's wonderful vocals. Peter Koppes is surely one of Rock's most underrated guitarists. How he summons some of those sounds from a mere six (or twelve) strings, I'll never know. For the first time, Ian Haug joins the band, also on guitars, and he meshes perfectly with Koppes. It's hard to tell exactly who played which parts on some of the tracks, but one gets the sense that Haug's contributions are significant.

Guitars, guitars, guitars! They are everywhere on this record. But that is not all - as I said to a friend the other day, Tim Powles is the perfect drummer for this band. He really brings a lot to the table - hypnotic drumbeats, curious time signatures, just the right amount of drums, percussions, and keyboards in just the right places - all of those elements, always just enough and never too much. He's very involved in the production and engineering and it's quite clear he has a real gift for it.

"Delirious" is up next and a perfect example of the many joys that this record holds. It truly is the antithesis of a pedestrian effort; this is a very rich-woven aural tapestry full of twists and turns. Once you think you've got the song figured out, they peel off yet another layer and take the listener on yet another journey. Kilbey's lyrics will be running through your mind for days to come. The music is so intense at times, yet so fragile.

Next up we have "Pride Before a Fall", here's the official video. Honestly, it gets better with each and every listen. Kilbey's songs have a very "cinematic" feel to them, for lack of a better word, and I think this video strongly supports that claim.

The backing vocals are just beautiful on this record. There is so much going on in each song, that you really cannot process it all at once. I'll be listening to this for a long, long time.

The album is available in a double-vinyl release with 15 tracks, a CD with 12 tracks, and digital download, thus far only available from Australia here to my knowledge, with an international release due out soon. I purchased both the vinyl and CD, though the vinyl release has been delayed until likely December. I received an mp3 download (of the 15-song version) with my vinyl purchase and the CD arrived a couple of weeks later. Curiously, the track sequencing differs between the formats and I, for one, much prefer the mp3/vinyl lineup - it really has a nice flow to it. I presume this was done so that the songs fit when spread over four sides of vinyl.

So, with my preferred vinyl/mp3 sequencing, up next is "Laurel Canyon" and it is my favorite track on the album. What a gorgeous song; it starts off with a great warm, west-coast vibe and just goes off into a lovely, soaring amalgam of aural delights. It's all here - Kilbey's wonderful voice and mysterious lyrics, those hypnotic and impeccably timed drums, gorgeous background vocals, curious keyboard bits sprinkled in and, of course, acoustic and electric guitars everywhere!

The aforementioned track is flip-flopped with "Toy Head" on the CD version, a darker piece with some fantastic piano. Again, I have to stress just how much is going on in these songs - the listener really wants to concentrate on one thing because each element is done so well, but then you risk missing out on the rest, which is why repeated listens are so very rewarding.

Again, we have a variation in sequencing - the vinyl presents "Old Coast Road" (swapped with "Love "Philtre" on the CD, though both have "Globe Spinning" between the two.) "Old Coast Road" starts with an upbeat cautiously optimistic vocal delivery, but with that recurring mysterious undertow. This song, as are the others, are so unpredictable, which is much of the allure. Predictability in songs can be found on the radio for the less adventurous. There is so much variety here, but it is all neatly woven together in a manner that really works.

"Globe Spinning" is, simply put, psychedelic space rock at its finest. What an apt title - you can just feel yourself being hurled through space on a journey courtesy of an outfit that is truly worthy to carry the torch lit by the likes of Pink Floyd and Hawkwind so long ago. This is a band clearly firing on all cylinders with exquisite results.

"Love Philtre" has a delicate beginning and draws the listener in with all the nuances and poetic lines. It builds gradually and really has an epic feel to it. A majestic drum beat drenched in reverb launches "Lightning White" a few seconds into the song and heads into a tantalizing offering of splendid guitar work, delicate lines, backwards guitar (and not some boilerplate gimmicky effect, but done just right.) There is a great, pulsating bass line anchoring this big, big sound.

"Let Us Go" features some interesting keyboards and clever guitar lines and blended vocals. "Volkano" follows and is another excellent example in which there is much more to the song than appears on the surface, or at first listen. Each track on this album has its own identity, yet they all fit so well together.

The final tracklisting diversion: the vinyl/mp3 lineup inserts three bonus tracks here, the first being "Marine Drive" with some great pedal effects and layered vocals. "The Girl is Buoyant" starts of with determined acoustic guitar strumming and just when you think you have the song figured out, it shape-shifts into a very layered, swirling song.

"Xmas" is arguably the most stylistically diverse track on the album, with a prominent melancholic keyboard piece and some stellar lyrics that really get you thinking. It's a sad song, but also a beautiful one. My only quibble with Further/Deeper is that these three tracks were curiously omitted from the CD release, though I'm sure they had their reasons for this. I'm not one to be opposed to bonus tracks (especially on vinyl) but these do not feel superfluous to me in any way and they really fit well with the album, add to the splendor and just make it even better overall.

This leaves us to the absolutely outstanding "Miami" to close the album. It is graced with Kilbey's stream-of-consciousness lyrics (who else could possibly deliver a line like "I think Humphrey Bogart stayed there in 1943" so successfully?) This is a song that really seeps into your memory and you will find yourself thinking about long after listening to it. It is filled with beautiful acoustic guitar strums that are just impeccably timed. This is quintessential Church. The piece is simply exquisite, all the way down to the slow fade out.

Hats off to all for stellar performances, and of course, Kilbey is steering the ship as always - the man is unquestionably one of Rock's greatest geniuses. I had not expected 2014 to add to my 'Desert Island Discs', but it just has. This is perfection.