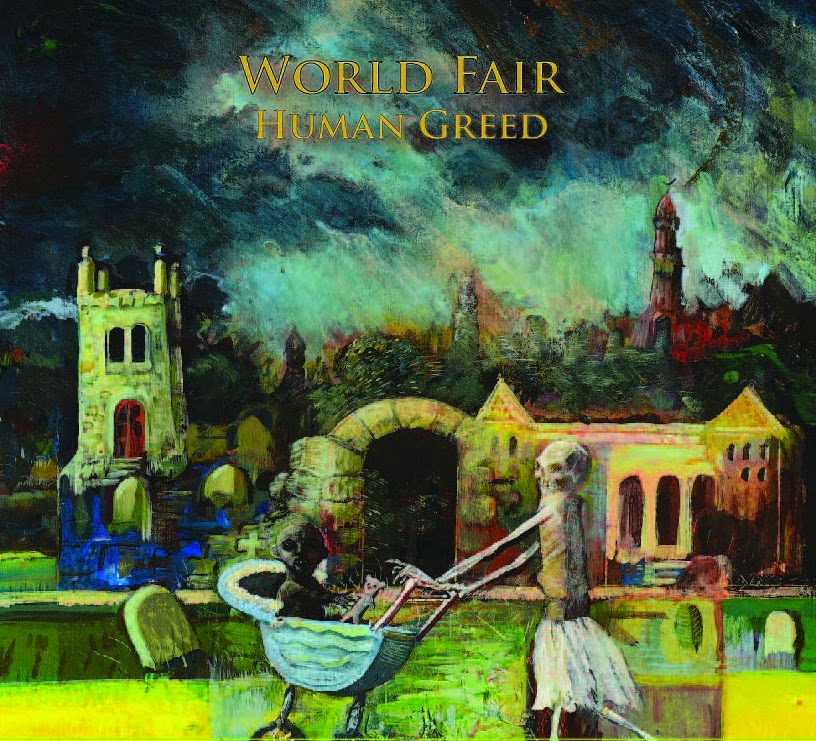 Human Greed, aka East Lothian based composer Michael Begg, has quietly been amassing one of the most impressive contemporary back catalogues in alternative/ experimental /ambient circles (though in truth none of these descriptions do this fine artist justice). Whilst earlier works such as "Pilgrim" and "Consolation" presented icy, desolate and wintery electronic landscapes, there has been a significant amount of warmth, layer and tone added to the last few Human Greed releases to the extent that "World Fair" is a hugely textured orchestral, and at times choral piece. Choice collaborators such as Julia Kent (Antony And The Johnsons), David Tibet (Current 93) and Colin Potter (Nurse With Wound) have added their contribution to the fabric of earlier albums, and on this new work Begg is ably assisted by luminaries such as Chris Connelly (Ministry), vocalist Sukie Smith and Scottish soprano Sophie Bancroft. In short, "World Fair" is an incredible achievement; previous albums "Fortress Longing" and "Black Hill; Midnight At The Blighted Star" are musical milestones in their own right, however this album is another quantum leap forward and as a result is like nothing else you will ever hear.

It should be mentioned that the album flows as a whole, a suite of songs that form their own distinct whole; an electronic and organic requiem mass. Opener "Invocation" is a veritable storm of electronic screams and howls; a landscape reverberating and echoing with electric gales. Then, a murmur of choral respite leads us into the title track, cello creating a sense of epic, foreboding elegance. It is both deeply moving and reminds this listener of Popol Vuh's darker, more gothic moments such as their classic soundtrack to Herzog's "Nosferatu". A whirl of scraping drones ends the piece on a glacial note and segues into "Waiting in a Car", a spoken word piece featuring Nicole M Boitos. Shimmering bells chime and merge with electric piano establishing a melancholy and otherworldly backdrop to Boito's words of reminiscence. At the conclusion of the track the noise of insect chatter and a disembodied chanting crowd creep in before "From Olden Disks" picks a delicate melody out of the analogue wind. As melancholic as this music gets and as electronic as it might be based it is nonetheless deeply human and utterly beautiful in its stately, haunted grace. A lone voice from the past recites memories perhaps long forgotten as drones and orchestral sweeps remind one of Coil, recent Ulver, and Begg's other musical work in the Irish collective Fovea Hex. A rattling piano plays amongst the sound of crows until "A New Bed's ghost choir creates the most unearthly of harmonies; again reminiscent in part of Fovea Hex and their singer Clodagh Simond's layered vocals, this is a stunning and utterly unique piece of music. Industrial music legend Chris Connelly narrates the "Entropy Suite", an orchestral march into hell that suggests Dead Can Dance's most delicate and darkest symphonic moments. Here, strings swell over the saddest piano notes you will ever hear; a suite of loneliness and lost memories. Connelly's Scott Walker-esque croon adds gravitas to a note perfect version of the traditional lament "Black is the Colour", the most straight forward and conventional track on the album. The build-up of strings in the finale is something that you need to hear, its impact on an emotional level cannot be ably described in words. "Lux" is an ice covered ringing cathedral of noise, dramatic stabs of strings punctuating the eerie coldness as a fiddle wails into the emptiness. "Heat Death Prelude" has a pulsating drone and frozen atmosphere that recalls "Soundtracks For The Blind" era Swans, siren wails of keyboard and cello meeting a tolling, persistent bell as bird like screams fill the spaces between the sound. "Chrysler" follows, a hum of electronic dread dissolving into almost optimistic organ and bursts of electric guitar. It is shiver inducing moment. Sophie Bancroft's vocals wisp around the hymnal "Finally The Night Has Come", a gentle reprieve amongst the storm and crescendos that preceded this hush. "Jvarasa Shensa" is a glistening, spectral orchestral piece, again sounding utterly heart stopping in its sombre beauty. "Fire"s percussion and chimes rattle and shimmer with an arctic glow before "Heat Death"s screaming wind gives way to Bancroft's angelic and haunted vocals once more, sounding not unlike something from Kate Bush's "50 Words for Snow". The sense of dynamic and flow in this music (it should really be listened to as once piece) is tangible; almost an orchestral movement in its scale and grandeur, this is easily Begg's most impressive work to date (and this is a massive fan of his earlier works speaking). The album closes with "The Landscape", the layered drones and effects creating a choral hum that fades into a distant crackling. It is difficult not to find yourself catching breath and feeling somewhat exhausted by the emotional and musical journey that has just taken place.

Human Greed are criminally undervalued; Begg is one of our most significant contemporary experimental composers. The scale that he has imagined and created with "World Fair" is testament to this. It is a masterwork and ably holds itself against Glass, Reich or any such revered names. Buy this album, turn the lights down low and perhaps close your eyes. Then just drift, observe and experience "The World Fair". You will not be the same afterwards.

Available now as a download, digipack CD or as a Singularity Edition which comprises "World Fair" and a bonus disc recording "Entropy Is Our Father, Heat Death Our Domain" by Michael Begg, Deryk Thomas and Colin Potter.