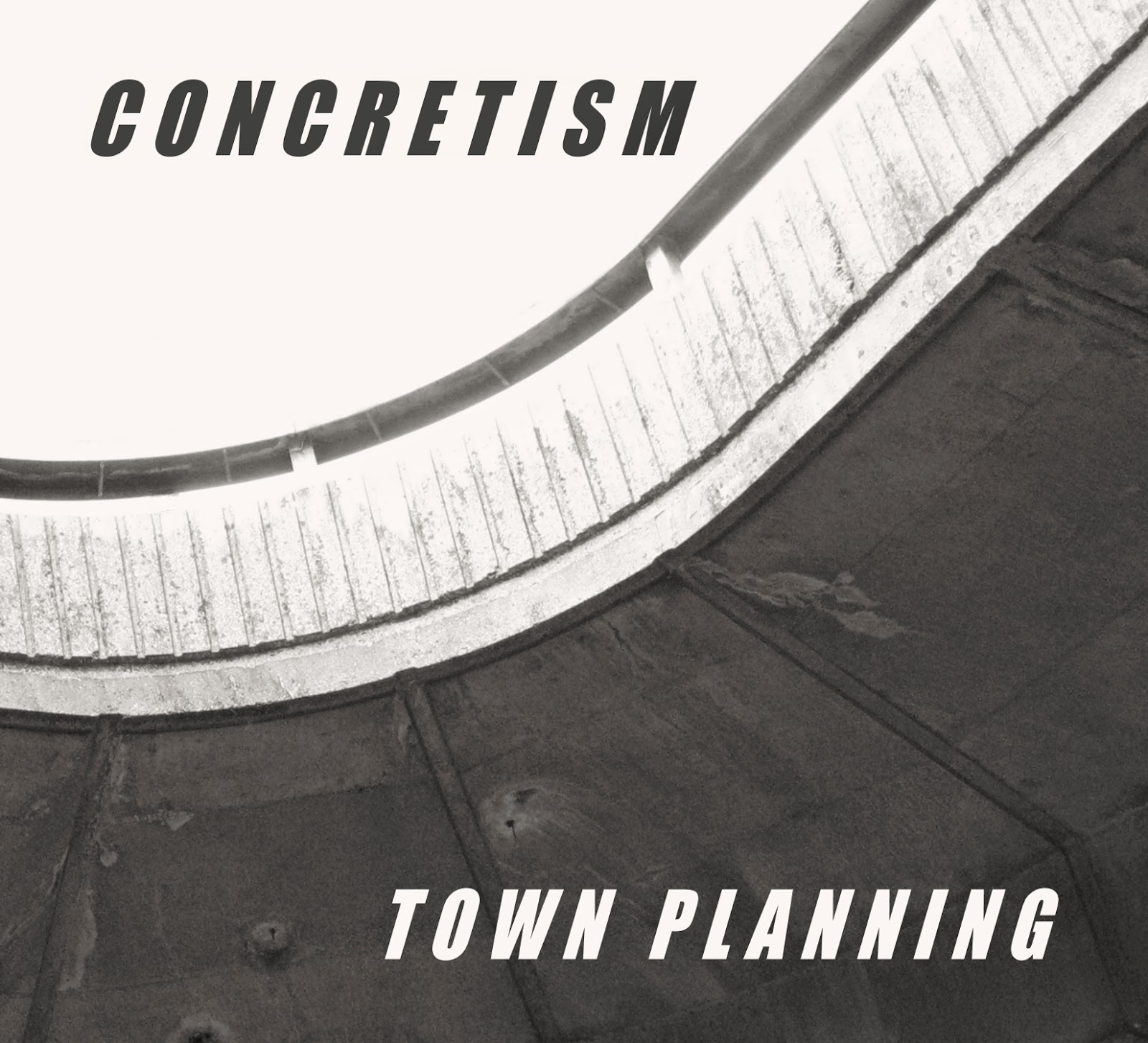 Chris Sharp's Concretism haunts the grey, urban decay and suburban shadows of England; a spectre amongst the graffitied flyovers and imposing tower blocks that spring forth across this septic isle. Previous releases (this is the fifth following four EPs) have covered this aural description of the city environment with analogue precision, suggesting Concretism’s role as an unofficial national electronic orchestra. Yet it is the new long player "Town Planning" (Concretism's first physical CD as opposed to download) which may be Sharps' most successful and emotive opus yet. Inspired by soulless new towns and "the drab urbanisation of post-war Britain' this is a dark psychogeographical excursion into a modern and realistic sense of Britain's towns, estates and alleyways.

"The Cursed Streets" is an immediate dérive into urban sprawl, a sense of urgency in the cold electronic rhythms creating tension within the warm electronic keyboard harmonies. Fans of Belbury Poly, The Advisory Circle and other hauntological acts will find much to love here but there is also something else at work, something uniquely Concretism. The rhythms and twists and turns of this music are not simply a harking back to 70's analogue sounds. There is uniqueness at work here that, whilst invoking "Metamatic" era John Foxx and "Telekon" period Numan, also envelopes Warp luminaries such as Broadcast and then adds...something else. Something of a distinct and personal vision. Make no mistake; this music is intense and driven, there is a sense of purpose and dread as it communicates something of its deep relationship to the cityscapes it inhabits, which is both contemporary and immediate. And yet, despite the instrumental electronica on display, this is music that is also deeply human in its desperation and reaction to its environment. For example, "Prototype Housing Estate', with its melancholy bleeps and vintage keyboards is a heartbreaking elegy to a once hopeful future whilst "The Age of the Train" is truly epic, an orchestral sweep gradually entering the song to create a genuinely breathtaking moment. The song’s pulsating heartbeat and yearning synth sound veers thrillingly into unpredictable, dark, overgrown and shadowy corners and laybys. Whilst many hauntological acts err on the side of minimalism, Concretism fills the space, takes unpredicted directions and propel towards something glacially grand and majestic. This is music on a large scale, both emotionally and musically. "Eiswagen"s shivering melodies recall Numan's "M.E"; a veritable choir of massed electric voices that eventually distort and dissolve. Tangerine Dream's later works are also a potential comparison as is the proto-hauntological OMD classic "Dazzle Ships". It could also be argued that TV soundtracks such as Ken Freeman’s music for "The Tripods" and Paddy Kingsland’s score for "The Changes" are equally key as reference points for Concretism’s motorik, synthetic nightmares. Yet none of these comparisons properly convey the claustrophobic bleakness and terror that is contained herein.

"Town Planning" is a sinister, crawling electronic machine of a song, stalking the city centres and urban overspill, hiding amongst the subways and car parks. Waves of icy electric drones wash threateningly over a central melody; yes this music is futuristic but it also deeply dystopian. "The Hospital"s analogue percussion and keyboard hum should be soundtracking a BFI DVD of archive footage of the brave new world of tower blocks and vast sprawling estates. The sense of encroaching darkness and decay is pervasive amongst the alluring and intensely memorable harmonies.

Indeed it is Chris Sharp's genius that everything on this album is brimfuI of melody and fully realised as songs; these compositions are absolutely not abstract bleeps and blips, but instead are a proper electronic suite of graceful and stately tracks that work easily as well individually as they do as a whole. "Tesseract" closes the album with a bleak and nostalgic air, melancholy seeping from the synths as an automated choir heralds in a new, grey cold dawn. It is a fitting end to the album, the very real sense of despair and sadness amongst the pristine electronica only making this music more distinctly human and with more of a palpable heartbeat.

The spectre of the recent past lingers in Concretism’s music, haunting the listener with a very urbane and distilled English vision. Ballard-esque in vision and distinctly English in its character and observation, Concretism provide a soundtrack to modern existence. Put "Town Planning" on your headphones and step out into the asphalt jungle, breath in the fumes and let the cold beauty and bleakness of the landscape seep into your very bones.

"Town Planning" can be pre-ordered on CD now from Norman Records - due Nov. 14.