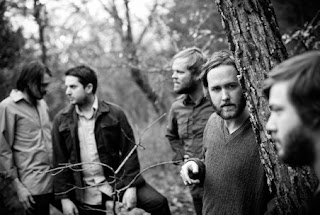 We took a look at ten of my favorite Cosmic American albums from the late sixties and early seventies here .
Now let's check out what the current generation have to offer with this selection of albums. Some artists are deserving of more than one placing, but I've stuck with just the very best title from each artist to keep a bit of variety.
For the selection process for this list I worked on only including albums released since the nineties ( so no Long Ryders ), and only selecting artists who seem to be heavily influenced by those on the previous list ( so no Fleet Foxes, Joanna Newsom or the like ).
I hope you find something new and interesting here, and as always feel free to post your list in the comments section - I'd love to hear anything I've missed and hopefully discover something listworthy that I haven't heard before.

15. Darker My Love - Alive As You Are ( 2010 )
Darker My Love's third album largely drops the shoegaze influenced psychedelia of their earlier releases in favor of a more rootsy approach awash with more traditional psychedelia. Backseat has the casual lope of vintage JJ Cale, while other tracks evoke the Grateful Dead, either through their titles ( Maple Day Getaway ), or their rickety Jerry Garcia guitar leads ( almost every other track ). The end result isn't a hundred miles away from Blitzen Trapper's approach.

14. Justin Townes Earle - Midnight at the Movies ( 2009 )
Son of Steve and named after the great Townes Van Zandt, Justin has some pretty big shoes to fill.  Refreshingly, unlike so many famous sons he doesn't sound much like Dad, even though he draws from the same well of inspiration. His cover of the Replacements Can't Hardly Wait is an inspired choice which shows his roots, but he's equally at home invoking the spirit of Hank Williams on the great title track. Definitely one to watch.

13. Deer Tick - The Black Dirt Sessions ( 2010 )
John J. McCauley III's voice is an acquired taste with a nasal buzz that seems to turn as many away as it attracts, but I find it highly effective. The album has a rough around the edges charm which makes me think of Exile on Main Street, although musically it's quite different. It's quite varied, from the mock calypso of Choir Of Angels ( better than it sounds ) to the stark piano balladry of Christ Jesus to the quite glorious Wilco-esque The Sad Sun there's something for everyone, and everything for this particular someone.

12. The Decemberists - The King Is Dead ( 2011 )
Quite a departure from the Hazards of Love's Fairport Convention meets Deep Purple approach, this is pure Appalachian Americana, tempered with a very keen awareness of pop smarts. Unfortunately the Decemberists have a habit of recording albums which sound slight on first listen, but grow rapidly in stature after a few listens and this is a good example of this. I eventually revisited it, after months of viewing it as a disappointment and it's revealed itself to be quite a gem. This is How We Fight is a total anthem, and guests Gillian Welch and David Rawlings feature prominently throughout and help give this the ring of authenticity.

11. Maggie Bjorklund - Coming Home ( 2010 )
This is a fabulous obscurity that deserves a lot more exposure. Backed throughout by Calexico and featuring guest vocal turns by Mark Lanegan and Jon Auer, it's a mystery as to why this hasn't been praised more highly elsewhere. Bjorklund plays a mean pedal steel guitar and Calexico's distinctive accompaniment give these majestic, windswept beauties a sense of grandeur I haven't heard since Calexico's Black Light. Stunning stuff dripping with tumbleweed atmosphere.

10. Grand Drive - Grand Drive ( 2003 )
Before forming Danny & The Champions of the World, Danny George Wilson led this prolific and highly under rated group. This release is a compilation of the best moments from their first three U.K albums, and is realistically one of the only ways you're likely to pick up this material now until their back catalogue gets the reissue treatment it so rightly deserves. Fans of the Jayhawks and Whiskeytown will fall in love with this stuff immediately and gems like Wheels have such a timeless sound to them, you'd swear they'd been around since the sixties.

9. 16 Horsepower - Secret South ( 2000 )
Wonderfully dark and apocalyptic appalachian here, with David Eugene Edwards coming across like Nick Cave's lost bible-thumping brother. Covers of Wayfaring Stranger and Dylan's Nobody 'Cept You are the weak spots, but Edwards own material is powerful stuff with vivid imagery and a forboding sense of doom not for the weak hearted. At times it approaches the claustrophobia of Joy Division's Closer, but impressively never loses sight of it's roots.

8. Blitzen Trapper - Furr ( 2008 )
Blitzen Trapper have come a long way from their Pavement inspired roots, and this is their most Americana informed album which effortlessly flits from quirky Beatlesque pop ( Sleepytime in The Western World ) to the hushed murder ballad Black River Killer to the quite wonderful Dylanesque title track. They seem to be a bit too diverse to fit mainstream tastes but the adventurous will find much to savour here.

7. The Silver Jews - Lookout Mountain, Lookout Sea ( 2008 )
A great album that's always on high rotation with me, this has a major Johnny Cash feel to it on tracks like What Is Not But Could Be If, but also finds time for the hilarious Lou Reed inflected San Francisco B.C ( which also reminds me of Hamell on Trial, if anyone remembers them ), and the heartbreakingly sincere We Could Be Looking For The Same Thing. Great stuff, and a perfect balance between the fun and the profound.

6. My Morning Jacket - It Still Moves ( 2003 )
It took me a few attempts to click with these guys, but when I did make the breakthrough I fell big time for them. This is the point where Jim James and Co. found the perfect balance between his angelic reverb laden vocals and the band's proclivity for drawn out Crazy Horse style jamming. Mahgeetah and Run Thru rock righteously, while Golden is one of the most lovely ballads in their catalogue, perfectly underpinned by quite possibly the most gorgeous steel guitar I've ever heard.

5. The Felice Brothers - Tonight At The Arizona ( 2007 )
The Felice's first properly distributed album ( outside of the U.S anyway )is still their best to me. The Dylan and the Band influences are most apparent here, but that doesn't bother me. I'm a firm believer in quality songwriting winning out over originality and this album has it in bucketloads, coupled with wisdom that belies their tender years. Roll On Arte sets the template for Frankie's Gun, albeit in a more downbeat fashion, while Hey Hey Revolver and Lady Day satisfy on the ballad front. The raucous live version of Take This Hammer captures all of the spontaneous energy of their live show and suggests that this perhaps is the medium they have the most mastery of?

4. The Jayhawks - Tomorrow The Green Grass ( 1995 )
Along with 1992's Hollywood Town Hall, this is impeccable, perfectly crafted country rock, wonderfully played and sympathetically produced. Marc Olson and Gary Louris' harmonies slot together perfectly to form something totally unique. I like to imagine it's the sort of thing that Hank Williams had in mind when talking about 'that high lonesome sound'. The songs are top drawer too. If anyone can explain to me why Blue wasn't a huge radio hit I'd be very grateful. Miss William's Guitar isn't far behind either. Heavenly.

3. Wilco - Yankee Hotel Foxtrot ( 2002 )
Coming after the Brian Wilson referencing Summerteeth, this was a bit of a shock to the system for me, but after much perseverance this has become one of my favorite albums. Jim O'Rourke's sonic trickery bathes the album in a peculiar sonic hue which should have dated by now, but still sounds totally fresh. Tweedy's ricketty guitar leads on the infectious I'm The Man Who Loves You are inspired, while Jesus Etc and War On War are sweet pop gems of the highest order. Now, if only they'd included Venus Stop The Train, this would probably have hit the top spot on the list.

2. Ryan Adams - Heartbreaker ( 2000)
Although the following album, the Elton John inspired Gold is undoubtedly more fun, Adam's appropriately titled solo debut has a depth he hasn't matched since. Raucous opener To Be Young (Is to Be Sad, Is to Be High) captures Dylan's Thin Wild Mercury Sound, but from there on in it's haunting acoustic balladry all the way. The Emmylou Harris duet Oh My Sweet Carolina makes him sound more like Gram's ghost than anything else he's ever recorded, and is matched quality wise by almost everything here.

1. Midlake - The Trials of Van Occupanther ( 2006 )
An unusual band with a very deliberate recording process which sees themselves reinvent themselves with each album, this is an album I've heard compared to a lot of bands. The closest comparison I can think of is Radiohead's OK Computer, performed through a filter of Neil Young and Fleetwood Mac's Rumors, although that makes it sound like Grandaddy, which it most certainly doesn't. And that's the sort of album this is, one that defies logical description and effortlessly merges genres that shouldn't be able to comfortably coexist. Opener Roscoe has an infectious chug, simple, great guitar work and a chorus to die for, while Young Bride is the tenderest of ballads. One album that deserves all of the hype surrounding it.