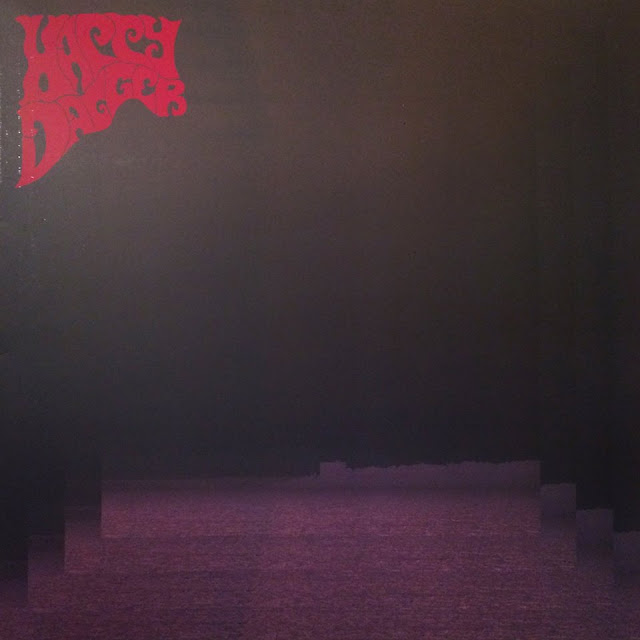 Woah! 2016 is only two months old and the new 'must listen to repeatedly til I balance on the cusp of (in)sanity' releases are rolling in thick and fast.

Happy Dagger's self titled debut LP is a rolling together of two releases made by one man (an EP in 2014 and full length in 2015), Jesse Robertson, of late a resident of Portland, Oregon which as you all know has long been considered a hotbed of bohemian alchemy. I am happy to report that this reputation is only enhanced by this physical release which gathers all bar two of their recorded output from the previously digital-only releases.

Happy Dagger surf on the same cosmic waves as many a West Coast luminary and plenty from further afield sucking up as it does everything from classic psychedelic, pop-art-psych moves, Dub and House music to create a modern hallucinatory brew that is very much a now sound.

The opening three tracks are drawn from the first Happy Dagger EP. Recorded in 2014 these tracks find a writer still finding his voice but having a great time doing it. It's a more than satisfactory affair and sets up the remainder of the record nicely. "Indian Summer" is driven by a sweetly restrained echoing guitar motif and some almost 'new romantic' keys and drumbeats overlaid with some lovely laid back vocals. "Waves" follows and again has an understated West Coast charm that reminds, glows and smoulders rather than catches fire, though one suspects that this was the intended outcome. Components parts are being assembled and you feel notice is being served on these early tracks.

Now, whether Jesse Robertson had any sort of epiphany before recording the material that makes up the remainder of this record in 2015, (selections drawn from last years digital only "Pareidolia" release), is moot. What is certain is that the leap in quality of the songs and their construction is stellar. From this point onwards. Happy Dagger exchanges potential for a solar-flaring out into technicolour brilliance, nailing it time after time with some of the best hallucinatory psych-pop I have heard in recent times.

"Who's Waiting" begins the charge with its softly sung almost Gregorian opening giving way to some fabulous psych-pop with surf touches before riding out on the back of some very tasteful guitar breaks. "Comedown" follows and is all skewed stop-start rhythm and stabbed guitar chords overlaid with echoing effects that recall a slightly less anxious Morgan Delt. Robertson's vocals are smeared over this strange brew, blowing gently over the listener as he repeats the phrase "feels like we're coming down" over and over again whilst peals of guitar squall tilt and richochet around your ears. Top class.

"Mariposa" is instrumental - an endlessly refracting guitar riff being squeezed and phased and pulled around in a shaky orbit of a plaintive and similarly phased and drifiting drum patter, each passing revolution being tweaked sonially almost to the point of complete obliteration. I love it.

"U Won't C Me" is dream psych-pop par excellence with its splashing guitar progressions and blissfully soft focused vocals. It could easily step into the ring with more established names in the new psychedelic firmament and come out having struck a few lusty blows for its creator. A winner.

'Revolver' is great art-pop in the tradition of Pete Townshend and Brian Wilson, dragged into the bedroom chop-shop and refashioned for a new millennia, beautifully melodic, all lovely vocals and fabulous guitar fills - a real ear worm reverberating through your cranium like the softest bullet ever fired. It may be my favourite thing on the whole record. 'Phantom' is muscular and has that nu-psych feel, with its bold slashing power chords and endless phased cymbal splashes. Together, the pair of songs constitute one hell of a seismic double whammy.

'Pyramid' is a groove driven miniature and has some excellent deeply reverbed wah-wah guitar playing to take you along for a short detour into what once could have been deemed 'baggy'. Closing track 'Always' is trance-like, bubbling along on waves of oscillation and feedback before a dub-style beat and circular vocal chant emerges and permeates your consciousness like an aural anaesthetic. The words are indecipherable and to be honest it doesn't matter. This is a pure mood piece - 'sensi-dub' psych, sonically manipulated until twisting into a final section of beat driven Balearic 'placid casual' house music. Its a quite extraordinary ending to a quite extraordinary record.

Add in the fact that this vinyl run is beautifully presented in purple/white splatter vinyl is limited to 300 copies from the always hip label guys over at slyvinyl.com and you have the recipe for a genuine must-have. Get on board.

Available from Happy Dagger at: http://happydagger.bigcartel.com/ or Sly Vinyl at: https://store.slyvinyl.com

And the two digital releases are both available as name your price downloads here: