Night Beats - Who Sold My Generation 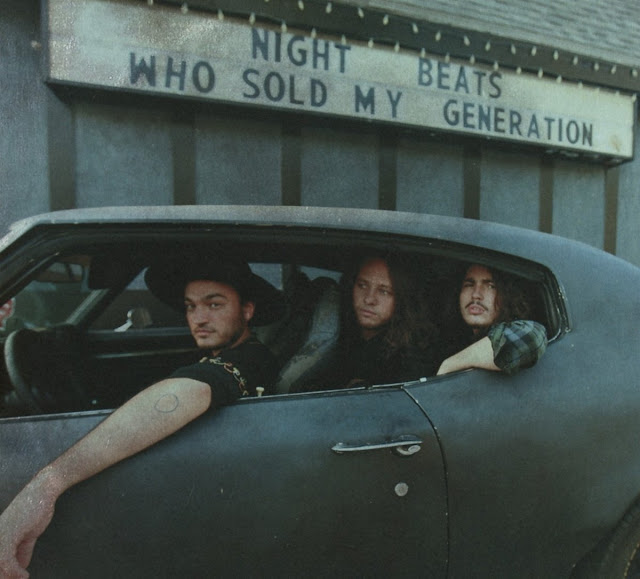 We long ago passed the peak time for band names and entered an era of ever shittier band names, so it is nice to find a band with a decent name that not only isn't an ugly mess of letters that look like a losing Scrabble hand, but actually in some way tells you what they are about. I'd heard the Night Beats name for a few years, usually after leaning into a DJ booth to inquire about what's playing. Their sound isn't immediately recognisable or catchy but they've proved popular with the sort of DJs who mainly play vintage sixties vinyl.

From Cream to Husker Du to, there's something about a good power trio that seems particularly satisfying. There's nowhere to hide. No room for makeweights. The small group allows the players to really get in sync with each other. There's no multiple guitarists or synth players so the sound isn't too cluttered. Most of those classic power trios had brilliant bass players who could do a lot of heavy lifting in terms of melody. The sort of plodding third rate bass players who can pass muster in larger bands wouldn't have the chops to fill in the sound for a top notch power trio. However, the more I listen to the Nights Beats the more I get the sense that the exact opposite is happening. All three members are hammering the same beat, not because this is all they can do but out of some monomaniacal focus on the riff, the beat, the one. This is their third album so it isn't a lack of musical ability. These are clearly good musicians who can all simultaneously turn on a dime when the riff must be replaced with another. But throughout I hear the floor toms and bass in synch, the cymbals splashing in sync with the guitars.

Night Beats are doing something akin to James Brown, stripping everything down and focusing on rhythm. Obviously though from a different musical starting point to the JBs. A few years ago Ugly Things did a big analysis of Freakbeat and found the unique feature was ditching the chorus as a musical break. At most, bands like Wimple Winch would have a short refrain that worked over, more or less, the same chord sequence. While not necessarily appealing on paper this meant the energy doesn't dissipate but instead relentlessly builds up. And this is what Night Beats do. They did it on their first album and they're doing it again here. On more or less every track. If your trick is to be relentless and focused you'd best follow through on that premise.

OK, not every track is identical but they are pretty consistent. The only significant departure is the opening track which mixes spoken voices and lead guitar soloing. There's a few overdubs and even guest musicians: a bit of harmonica on "Turn The Lights" and "Bad Love" has some honking sax and Seeds-like keyboards for added 60s frat band feel. "Last Train To Jordan" cops the drum beat from The Stooges "No Fun" as opposed to the simpler Velvet Underground style floor tom beat that dominates elsewhere here. Not that I'd compare the Night Beats to those bands, the guitars are more restrained, disciplined. Reminiscent of the tightly wound brittle phased sound of The Electric Prunes or The Feelies. Similarly the vocals aren't making much in the way of clear statements. While the album title might sound like a timely address to the disenfranchised youth of late period capitalism I can't make out much polemic or anything else. Always in service of the murky beat.

Of course the only downside is if you don't like this approach then there's not a lot of point hanging round in hopes the next song is more to your taste. But the murky, mysterious beat they keep pounding out is still pretty damn appealing to fans of both old and new psych.

"Who Sold My Generation" is available on digital, Vinyl and CD here (UK/EU) and here (US).