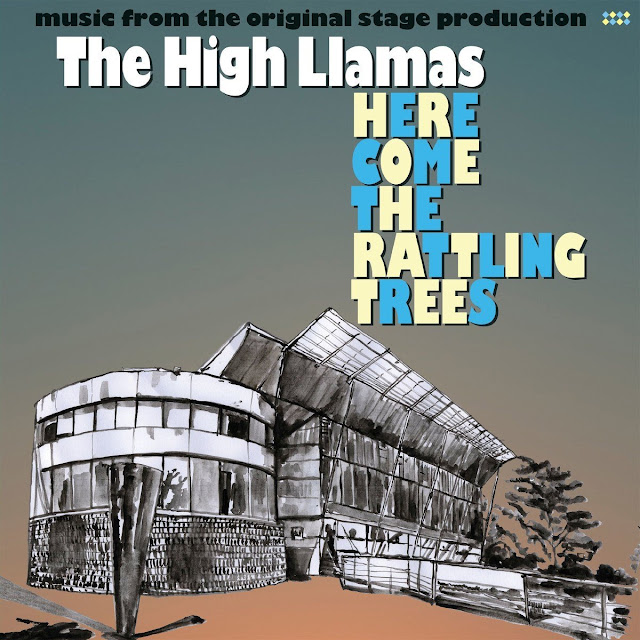 Setting off on a blustery March Saturday to cycle to town while playing "Here Come the Rattling Trees" with no pre-conceptions beyond "It's another High Llamas album" and more of that anon, presents an intriguing variation on their usual pattern. There's some kind of structure and similarity here, all of the songs are short musical sketches followed by character studies of individuals. Is this some form of concept album? It certainly seems a little more lyrically focused, albeit on some daydreamy characters. Even the music is ...well let's be honest it's not rocking, but maybe a bit more precise, with nylon strung guitars and harpsichords foregrounded and less echoey exotica and orchestral arrangements. A little more Brian Wilson and a little less Burt Bacharach.

So is it a concept album? Well, not as such. It is described by the High Llamas as both "a musical narrative" and the soundtrack to a stage production, apparently inspired by cycling round Sean's South London home in Peckham.There are concerts, or performances scheduled for May 2016. Though the musical gauze of the High Llamas finds its match in lyrics which don't exactly punch you in the face. These songs are slight enough but cumulatively paint a picture of nostalgia and a disappointment with the changes that have been occurring across the area concerned.

But really this isn't all that much of a departure. No, High Llamas fans are not going to be pushed out of their comfort zone. Not even if maybe they should be, or might want to be. Really this is the only criticism you can make. It's not much of a criticism either. After all I doubt anyone wants to hear Sean O Hagan's dubstep album. Though it can present its own drawbacks for both fans and musicians.

The High Llamas have been one of those bands with a distinct sound, a specific niche, that as a result, have been in danger of straddling the border between refining their unique sound and treading water. While the radical departures and experimentation some artists take can fall flat, and trying to stay current is more often embarrassing than hip, there is a real danger of lapsing into samey pastiche. Albums like "Snowbug" and "Hawaii" are great personal favourites but as the years have ground on each new High Llamas LP presents a conundrum. If your 17th album sounds quite a lot like a weaker version of your best one, that can retroactively infect your greatest work. If I'm being honest there's at least two High Llamas LPs I bought straight away but never really played for fear they'd be the one to leave me cold. Maybe the fact that they all seem to feature a pastel crayon drawing of some odd mid-century buildings adds to this effect. "Here Come the Rattling Trees" does not break with this convention, so the journalistic imperative was required to get out and get stuck into this album.

And I'm glad I did. Sean O'Hagan is still refining the High Llamas sound. And given the tone of the lyrics we can be quite sure that this classicist approach will continue. This is the sound of the streets of Peckham done the High Llama way. Now where's my bike?

CD, vinyl and digital available here (UK/EU) or here (US).