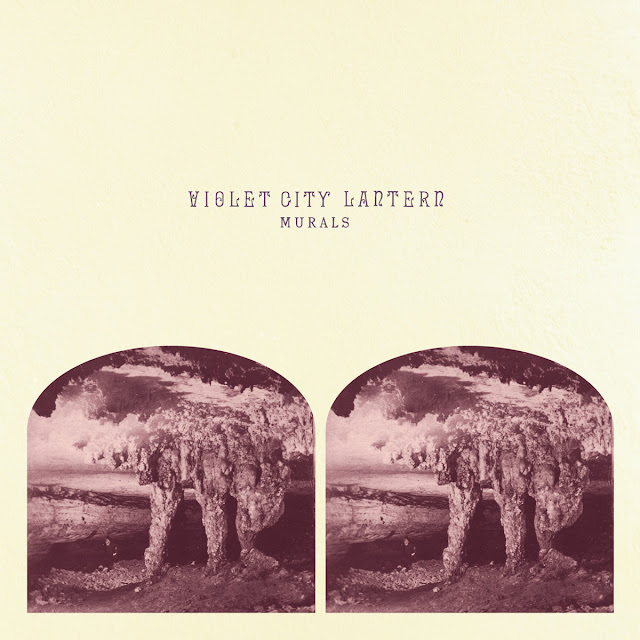 And on its goes, another amazing and essential release rolls up at the Active Listener London Division HQ on a mission to beguile and spellbind the likes of me with some fabulous sonic architecture. 2016 really is turning into a great year.

Murals are from Louisville, Kentucky (home of old school favourites of mine Squirrel Bait - random fact) and some 10 years since first forming they have finally dropped their debut long player on an unsuspecting world - 'Violet City Lantern'. I cannot tell you how long the tunes on this record have been incubated for but I can guarantee you that contained within these grooves (vinyl and download only pop pickers) is some of the best and most challenging pop music I have heard in many moons. Fully realised, cinematically charged, ethereal and enigmatic tunesmithery is the order of the day with this baby and I am totally sold.

Trying to pitch the record to you as the masterpiece it so obviously is, is kinda tricky. It has a huge amount of layers, some that only become apparent after repeated listening and the band clearly draws on a massive range of influences that I guess range from the Velvets, West Coast Pop Art Experimental Band, 'Smile' era Wilson (and auteurs such as Michael Lloyd or Curt Boettcher) through to early 80s perimeter dwellers like Joy Division, Echo and the Bunnymen, maybe adding some early Spiritualized and Galaxie 500 as well as feeding on the same sunlight that more recently has founded the early work of , say, Grizzly Bear whose acme release 'Yellow House' is perhaps the last record that may draw some comparison. This is heady company to keep and the art in this alchemy is how the list of esteemed artists I have just laid on you are merely glimpsed as Murals pursue their own restless quest for something that is never really made clear in any semblance of narrative on the 15 tracks found here. The vocals are beautifully buried in the mix, slightly out of focus, ghostly baritones uttering sacred incantation. The melodies are woozy and often spellbinding, kaleidoscopic in their restless reassembling of themselves as Murals obsessively stretch and search their compositions for new forms of expression. Sonic collage segments litter the record providing ambitiously tasteful segues - wonderfully atmospheric and integrated perfectly into the wider whole. Its a remarkable distillation of sounds. Here are some highlights.

Opening collage/prelude 'Rain' sets the tone with its myriad gently cascading instrumentation cinematically signalling we are in for some real cool ride before fading into the title track. "Violet City Lantern" is an absolute stunner that rises softly and slowly out of the speaker gently couched in gently strummed vibrato guitar chords and hush toned baritone incantations before amazingly floaty peals of melody chime forth and lift something that started with huge promise into a tune of stratospheric loveliness.

"Smoke Follows Beauty" is a stunning piece of work, emerging out of a low rumbling 'Atmosphere'-like entrance before blooming beautifully into a technicolour mid section with sailing walls of chiming reverbed guitar before exiting into a Wilson-inspired 'Wind Chimes' style finale. An amazing trip and when the mix tapes of 2016 are compiled I expect to see this prominently featured in many places. "White Wheel" fades into view on a circular guitar and drum motif with wind chime accompaniment that ushers in some absolutely beautiful almost Gregorian vocals and reverbed zither spell-casting. Like much of the record it spins tightly on its own axis, nothing overstays its welcome on this record. Its akin to opening a musical box and watching the pretty ballerina turn around on the spot over and over...

"I Live Here" is deep and mysterious with more of those beautiful chiming guitars and oddly punctuating time shifts that seem deliberately implanted into the compositions to keep you spinning like a kid on a fairground ride. "The Swimmer" could be a musical interpretation of the strange Burt Lancaster art-house movie from the late 1960's with its gently swaying guitar and slightly submerged vocal and piano lines punctuated by disorientating pauses and swells. There again it could be about nothing at all - sometimes answer are superfluous. "The Lost Star" is cosmic campfire music as played by the 1969 Velvets line-up and "Warm Country Magic" is an interlude of stretched soundscapes that incorporates echoed piano runs and pedal steel indolence, replete with grasshoppers. "Adina" continues the mood, its gorgeous surges and gentle breakdowns recalling the days of charming men and high land, hard rain - all beamed through the dream-like prism of its creators.

"One Thousand Pictures" is almost nailed down by a mototrik beat as once more the music threatens to evaporate into the air before your very ears and closer "Violet City Showers" brings matters to a suitably blurry conclusion emerging as it does after what feels like a lifetime of rainy-evening field recording intro into a final dreamscape that manages to be even more ethereal than anything that has gone before it - levitating on reverbed harp sounds, modulated synth waves and ghostly distant voices. You are cleansed, you are cleansed, you will never hear distortion again...

With 'Violet City Lantern', Murals have most likely released one of the year's strongest sets of recorded music. The dream-like awe and wonder that erupts from these songs is staggeringly evocative and well, it's all too beautiful. So please, carry the lantern high.