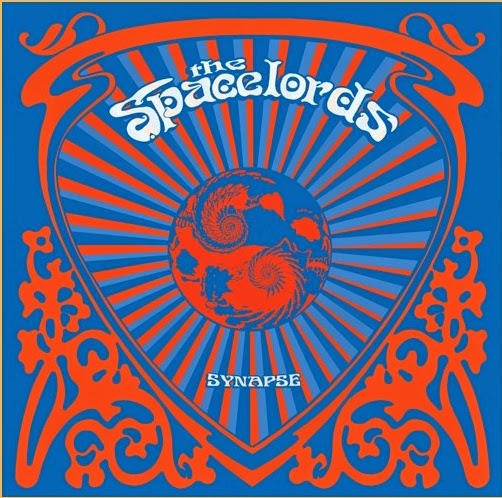 I don't care what the old adage says, sometimes you can tell a book by its cover, and the new album from German trio The Spacelords sounds exactly like you would both hope, and expect from its cover.

Album number four for the trio (and their first to appear on vinyl - thanks Sulatron Records!), "Synapse" is good, old fashioned spacerock of the highest order possible, the sort of album that is required to justify lofty claims of space lordship.

As such, it's regal, majestic and grand enough to inspire the respect and devotion of its subjects, but also self aware enough to know that the best spacerock isn't all about bludgeoning riffery, but also about the spaces between the notes, and that's where The Spacelords really shine. Over four long tracks that build to generally thunderous crescendos, it's the melodic bedrock that these three set for themselves via Klaus's warm, vintage synths and the expertly manipulated array of invariably melodic themes that Hazi coaxes from his guitars that add the human element that makes these tracks so easy to engage with.

I found the heavily treated guitar work during the introductory phase of "Sitarguitar" to be particularly effective with its gently ebbing and flowing theme striking a melancholy chord that evoked something enormous and cosmic, without having to even resort to distortion, let alone the big, dumb riffs that most bands of the genre rely on.

And while there are certainly some pretty big riffs to be heard here, they're used sparingly and always in service to the song, providing emotional peaks and resolution, rather than being the be all and end all.

So, old fashioned in the best possible way, "Synapse" is an extremely well crafted album that paces itself effectively and displays subtlety and restraint at all the right moments. There are plenty of young spacerock bands out there that could, and should use this as their bible.