The Junipers "Paint The Ground" 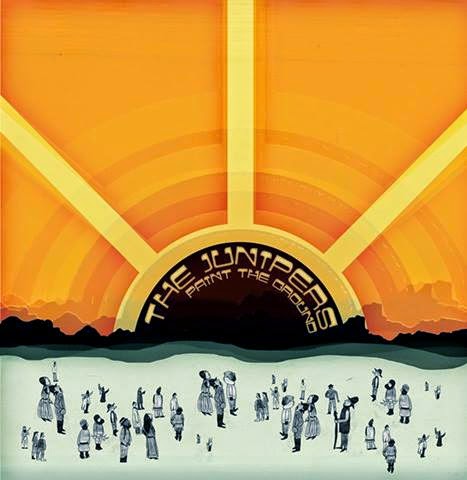 Originally released in early 2012, this is being reviewed now because a.) I've only just discovered it recently, and b.) because Sugarbush Records (who also released the vinyl version of Orgone Box's "Centaur") have just given it a much deserved first vinyl release.

This new limited pressing of only 300 copies has given what was already a pretty lovely sounding album (in digital form) a new lease of life with a fantastic, warm mix for vinyl that enhances its already sunny disposition.

Stepping back slightly; "Paint The Ground" doesn't exist in a vacuum. The Junipers formed in Leicester back in 2000 so they've had plenty of time to hone their sound, and "Paint The Ground" is very polished indeed. Not polished as in overproduced, but exceptionally well crafted, self aware and just right in every sense of the word. Much care has been taken here.

Which is all well and good you say, but what does it actually sound like?

"Paint The Ground" simply put, evokes giants. "In My Reverie" and "Phoebus Filled The Town" occupy the same bittersweet melancholic realm as Midlake's "Trials of Van Occupanther". "They Lived Up In The Valley" perfects the close harmony acoustic magic that Pink Floyd were occasionally dabbling in between "Zabriskie Point" and "Meddle". "Willow & The Water Mill" has the quietly swelling glory of mature Teenage Fanclub at their most pastoral. Elsewhere there are echoes of everyone from early Stone Roses to "Nuada" era Candidate.

There are many that would perhaps regard these comparisons as doing a disservice to "Paint The Ground", The Junipers after all do have an identity of their own. The point that I'm trying to make is that while others evoking such noble forebears would lurk in the corner, unsure of themselves and shuffling their feet uncomfortably, the songs on "Paint The Ground" can stand proudly and confidently amongst them and cast fairly lengthy shadows of their own.

Is it the most groundbreaking and original album you'll hear this year? Certainly not, but chances are pretty good that song for song, harmony for harmony it'll be the best, and I'd wager that there's not an album that better captures the hazy, bucolic, watch-stopping nature of Summer.

And while I'm waxing lyrical about the Junipers I should also mention this rather fun E.P of tracks too "pop" to fit in on their more ambitious album releases. Well worth a listen.