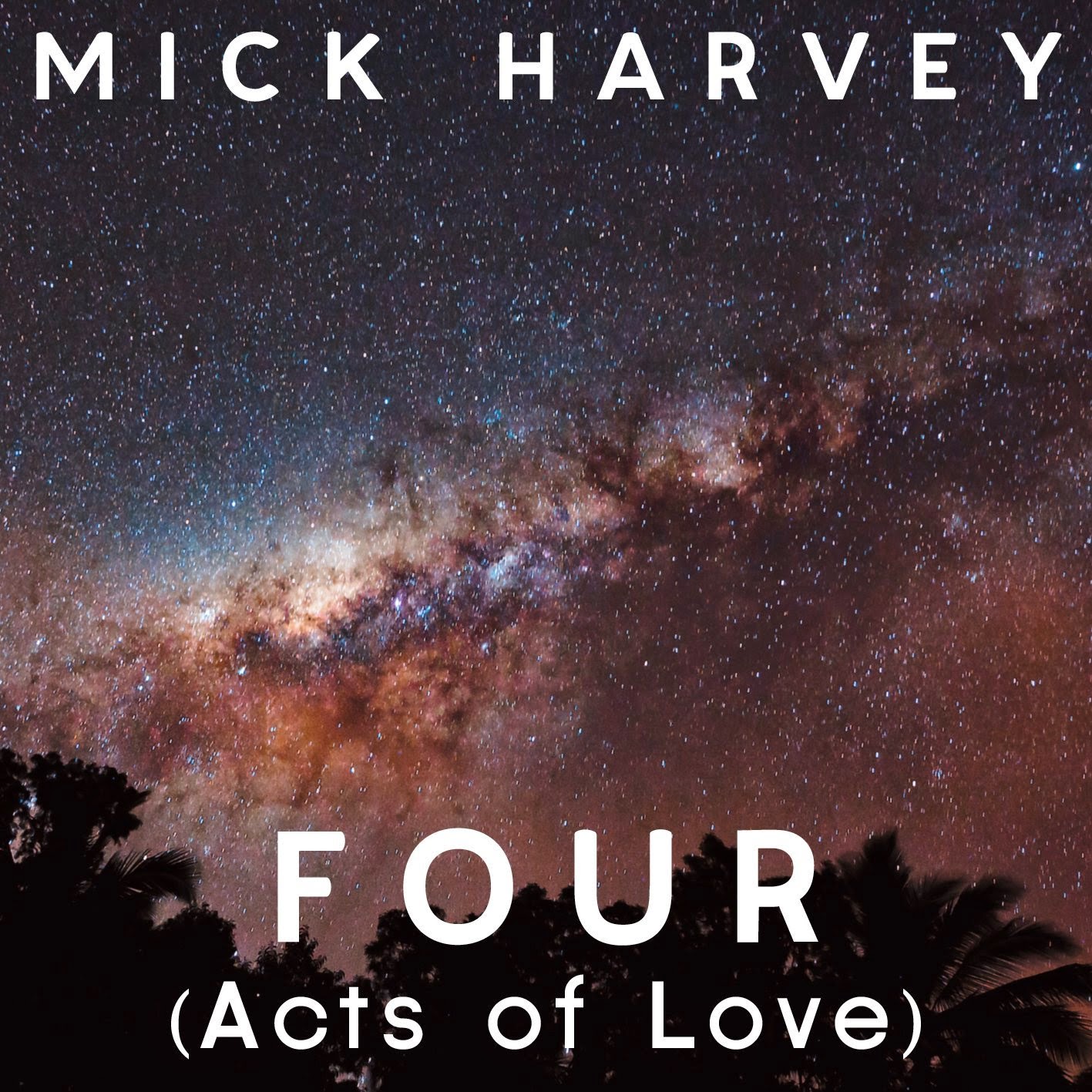 Mick Harvey has had a long and illustrious career. Spending time in The Birthday Party and The Bad Seeds in his earlier days, he’s also made solo albums and film scores, handled production for artists like PJ Harvey and Rowland S. Howard, along with numerous Bad Seeds-related albums. Yet, while he has certainly kept busy throughout his career, his own solo albums seem to be somewhat overlooked in favor of his collaborations. That is criminal though, as his solo work is the equal to anything he ever did in collaboration, or any of his film scores. On his most recent studio album, Four (Acts of Love), he again ably and amply demonstrates his genius, crafting gorgeous, deceptively simple songs that are perfectly constructed. The album itself is a song cycle, divided into three parts, each part dealing with a different aspect of romantic love: loss, reawakening and our struggles with it.

This is, of course, done in the way Mick Harvey does things. It’s an ephemeral, contradictory, and what some might term dark exploration of what love is, what love means and keeps its distance from contemplations on love often found in popular culture. Love, here, won’t necessarily save you or make everything alright, won’t always bring you calm and peace. It will mystify you, lead you down a winding path to a conclusion that isn’t really a conclusion, but another part of the journey. This search for meaning and lack of true conclusion or reassurance is a thread that runs brightly through all of Harvey’s work. Here, the path begins with the beautiful “Praise the Earth (Wheels of Amber and Gold)”—a song structured around a simple, delicate, repeating musical motif that becomes sublime when coupled with Mick Harvey’s voice. The sound of his voice and the way it blends in with yet rises above the instrumentation in a kind of perfect accord thoroughly compliments the music, allowing his words to ring out clearly. He sings of the sun, the moon, the sea and the earth in what sounds to be poignant joy at their beauty. But then, the sun and moon themselves speak through Harvey, reminding us that one day even their light will die. At the end of the song, the question is posed that is contemplated throughout the album: “Our dreams and all that we’ve done, where have they gone?” Based on a hymn originally composed by Reginald Heber, Harvey’s reinterpretation maintains the aura of a sacred song—but a sacred song not without skepticism directed at the divine which it was intended to praise. The PJ Harvey-penned “Glorious” follows, a song that both mourns and celebrates an overwhelming, ruinous love. Though the song is distinctly PJ Harvey’s, having that certain bluesy tone to the music and flair to the lyrics she does so well, and she does duet with him on it, Mick makes it his own entirely. “Where There’s Smoke (Before)” adds a bit of dissonance into the mix and closes out Act 1. The companion to this track, “Where There’s Smoke (After),” opens Act 3 and is infused instead with something almost darkly jazzy. “I Wish That I Were Stone” perhaps best exemplifies Harvey’s ability to masterfully craft a song.

The music itself is fuller yet still delicate and rises and falls in subtle counterpoint to Harvey’s voice. Throughout the three acts are sprinkled a handful of eclectic covers: Van Morrison’s “The Way Young Lovers Do,” The Saint’s “The Story of Love,” Exuma’s “Summertime in New York”—wherein something of Harvey’s past in bands like The Birthday Party can be discerned—and Roy Orbison’s classic “Wild Hearts,” which is stunningly interpreted here. The songs are joined together at times by instrumental interludes; short, atmospheric songs in which Harvey’s skill as a film composer can be heard. “Midnight on the Ramparts” is an excellent illustration of this, in which an echoing whistle rises above the instruments, intimating a quiet longing. At the end of this cyclical journey, we arrive back at the beginning with a second version of “Praise the Earth.” The words “Into the unknown” ring out the end of the cycle, leaving us no wiser than at the start. But when dealing with the subject of love, of the joy and sorrow it can bring, there can be no definitive answer. The rambling, winding journey is all there is.

Available on vinyl, CD, and digital.