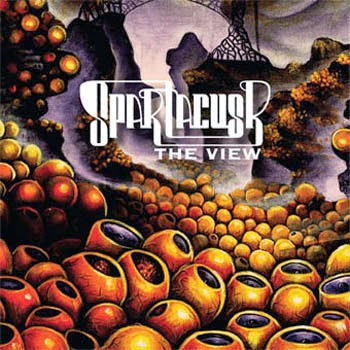 Wellington based proggy psych dudes Spartacus R originally released "The View" back in 2011, but I'm bringing it to your attention now because I know there are a few vinyl hounds in the house, and this very worthwhile effort is now available on an extremely limited run of nice, solid wax that puts the original digital version to shame (not being a snob, that's just the way it is.)

Opener "Rapata" is a great scene-setter and does a pretty sterling job of answering the much pondered question of what "Dark Side of the Moon" era Pink Floyd would sound like if they were more fun to hang out with at parties. It's got that warm, comforting vintage rhodes sound in spades, but Tim Prebble's supple bass really injects some pep into proceedings - he's credited with melodic bass on the back of the sleeve, and I'm not gonna argue with that.

The rest of "The View" rattles by in a similar fashion. As a six piece they've got plenty of room to stretch out and improvise, as well as more flexibility to get all texturally psychedelic on it, and neither opportunity is bypassed, although structurally the bare bones of the songs seem very thoughtfully assembled with plenty of prog-funk riffery pulling things back into focus when other bands would potentially wander off and get a bit waffly.

Sadly, a number of members of Spartacus R are now based overseas so opportunities to catch them live are few and far between, but I've heard rumours that earlier this year everyone happened to be in the same place at the same time long enough to get some recording done, so we may have a follow up to look forward to soon?

In the meantime, there are extremely limited quantities of vinyl of this available from Death Ray Records in Wellington - message them here to see if they'll send you a copy.