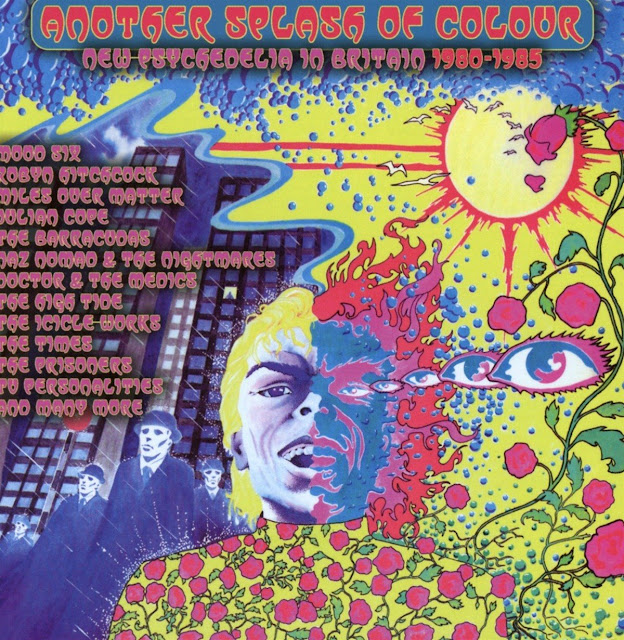 The UK neo-psychedelic scene hasn't been suitably represented in the overflooded reissue market, to the extent that some would assume that this scene never existed in the first place. This new three disc box set seeks to address this by taking the obscure 1982 WEA Records compilation "A Splash of Colour", and expanding it from its original 12 tracks to an expansive and all encompassing 64.

The original comp focused on like Miles Over Matter and Mood Six, beacons from a small but vibrant London scene. This expanded collection is a much more ambitious affair, chronicling the years 1980-1985, with a focus that includes the mod-influenced London neo-psychedelicists that appeared on the original comp, bigger names like Julian Cope and Robyn Hitchcock, as well as the earliest release on the Creation Records label.

The influence of the mod revival and other contemporary sounds make themselves known often here, so there's little chance of  mistaking any of these tunes for the sixties originals that they're inspired by, but the blend of Byrdsy jangle, post-punk drumming and enjoyably dated keyboard washes that characterise the majority of what features here is surprsingly successful, with memorable songwriting that fuses the best of the vintage with modern (at the time) embellishments.

And don't let it be said that I'm making sweeping generalisations about everything here conforming to that description; some of the most rhrilling appearances here are from those who throw the boat out a little further. Nick Nicely's "Hilly Fields (1892)" is an obvious highlight. If Macca had tried to recreate the overt psychedelia of his 1967/1968 recordings during the reckless experimentation of the "McCartney II" sessions he might have come up with something this good. The Cleaners from Venus meanwhile perfectly recapture that very particular UK whimsy of 1968 (without actually sounding like a product of those times) on their charming "Wivenhoe Bells II", certainlyone of the very nest examples of Martin Newell's skewed genius.

It's not just the more lauded contributors that provide the memorable moments here though: of particular merit is the Magic Mushroom Band who raise some eyebrows with a pretty great piece of Hawkwind influenced space-punk.

Cherry Red and their subsidiary labels do a marvelous job with these sorts of comprehensive, should-be-too-ambitious-but-works-perfectly box sets, and this is one of their best (still not quite as good as this though).It's the sort of comp that could prove a catalyst for an entire scene re-evaluation, if the right people were to hear it.

It's a lovingly crafted package too, which comes in an appropriately colourful clamshell box, with unique card sleeves for each disc. There's also a weighty booklet with an authoritative essay, laden with background information and plenty of visual material. A hugely enjoyable collection which I had no idea that I'd enjoy this much.