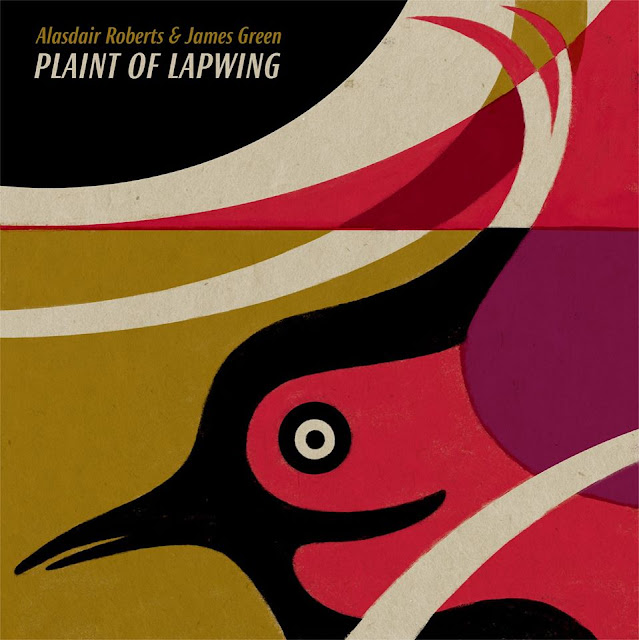 The East London micro-label Clay Pipe music has, for several years now, been quietly releasing exquisitely recorded music that straddles the folk/hauntology/neo-classical divides. These releases have benefitted hugely from the care given in their presentation by label owner and fabulously gifted illustrator Frances Castle who ensures every foray is sumptuously packaged making every release a multi-media event.

‘Plaint of Lapwing’ is the latest release from the label and a worthy addition to an impressively singular and delightfully off-kilter canon. Composed in a ping-pong match of file sharing and song building between Alasdair Roberts and co-conspirator James Green which has created a wonderfully fuzzy felt folk incident that recalls the best of the Incredible String Band and C.O.B. in its celtic-infused, heather tinged plainsong. For those of you who wonder what a ‘plaint’ is, one would think of it as a lament and given the declining numbers of the Lapwing bird in the British Isles it is an apt title for the music herein, which whilst bright and warm on the surface hides hidden depths of longing and reflection.

The ten tracks that make the whole ebb and flow gently and are hugely evocative. This is completely down to the rather wonderful marriage of the classical folk intonation in the voice of Alasdair Roberts and the warm and sympathetic yet inventive musical accompaniment, often on the rarely utilised harmoniflute by co-conspirator James Green. Jigs, reels and waltzes all sail past after one another to create a magical tapestry of sound that transports you deep into the wilds of Scotland and back to the dirty old ports where a hundred lonely dreams are dreamt each day and the chance of escape to who knows where is never far away. As I said it’s a very evocative piece of work and each listener will find a different place in their heart and consciousness for it. The main thing is you let it work its magic on you and give yourself over to it for a half hour.

Picking out highlights here is a fairly nutty concept given that I feel it works best when listened together as a whole, but as you asked… opener “Ananke” is a lovely breezy welcome counterpointed by the beautiful and reflective “If There Is Any Light”. “Boy of Blazing Brow” with its pulsing double bass taps out a warning in a classic cautionary tale and the title track itself is a beautiful, slow trawl across the moorland of your mind. By the concluding “Hallowe’en”, a stark and simple piano-led ballad we have been fully immersed in the world created by these two estimable and fine musicians to such effect that I am thinking about moving out to some fishing village on the west coast of Scotland and am searching my kitchen for the bottle of single malt I got last Christmas. I now know why I didn’t finish it – I needed it to compliment my time spent in the plaint of lapwing. I suggest you do the same.

The Hangman’s Beautiful Daughter continues to sire her young this summer…seek this out and be prepared to bare your soul to a record that won’t be denied.

Available on limited vinyl direct from Clay Pipe Music or from a select number of very discerning independent retailers (such as Norman Records). This'll sell out before you know it.