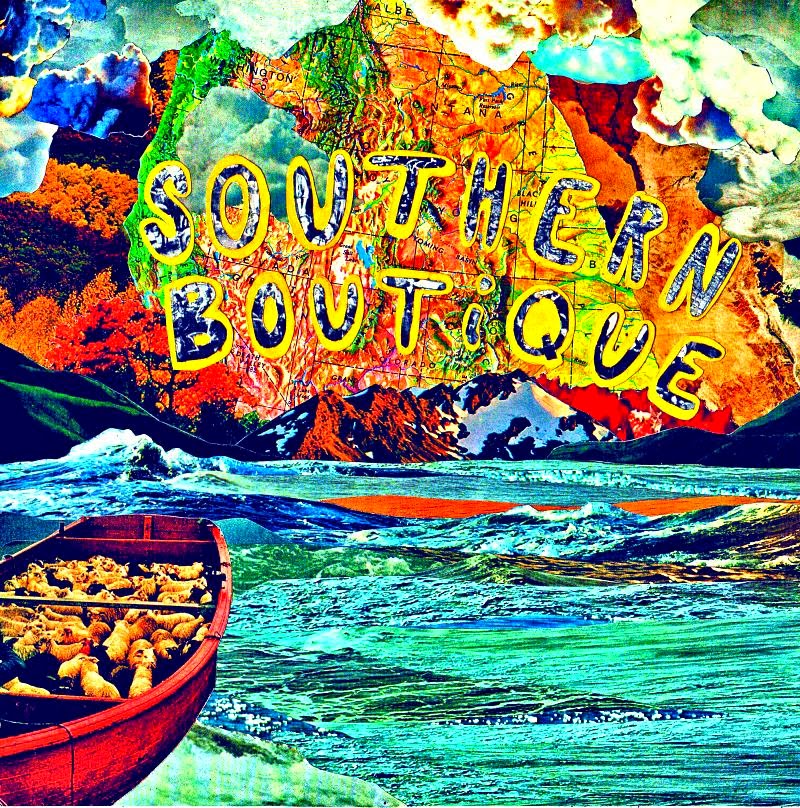 Here's another quickfire review/guide to recent psychedelic releases that you can download for free (or name your price starting at $0) from Bandcamp.

Southern Boutique "Southern Boutique"
In June I was telling you all about the two debut singles by this Austin trio (also both free downloads), and it turns out they had a full album up their sleeves which is now out. I didn't really do my research with that first review, but I'm now able to tell you that these three had previously been in the band Tiger Waves, which goes some way to explaining how accomplished those debut singles and now this album are. For the most part it's marvelous Beach Boys inspired indie pop with great vocal arrangements, lashings of psychedelia and moments of lovely vintage surf-pop that mesh perfectly with its more contemporary moments. The closest comparison I can conjure is Lawrence Arabia if he'd been raised on the Beach Boys rather than the Beatles. Quite why these gents are giving an album of this quality away for free while some forward thinking indie label like Bella Union hasn't snapped it up is a mystery to me, and one that you should take advantage of. Download, marvel and share with all your friends. The sooner Southern Boutique are household names the better.
Download here:

FoneZ "Adhesivo De Contacto Espacial"
This extremely appealing instrumental E.P is just one of the many things which turn up in my inbox vying for attention each day and it immediately stood out from the crowd. Córdoba, Argentina is probably not the first place that you'd think of for classy krautrock like this, but FoneZ spound like they were born listening to this sort of stuff. There's a lot of krautrock beiong revived at the moment, even mainstream indie bands are pulling on it to a certain extent, but what's refreshing about FoneZ's approach is that they don't use the format as an excuse to let songs drag on, with each of these songs being succinct and distinct with an emphasis on melody, as well as the expected krauty rhythms.  It's also surprisingly buoyant, with vibrant, ascending guitar parts and quirky vintage keyboard sounds revealing a sense of fun that's often absent from this sort of thing, and often leading things into post-punk territory that recalls Magazine or Wire. Pretty interesting stuff.
Download here:


El General Villamil "Archipiélago 32' "
Another surprising E.P from an unexpected source is this great one from El General Villamil who hail from Ecuador. This one has an excellent surf meets early Kinks vibe, kind of like the first Allah-La's album, with great vintage vibes in the form of garage jangle, nasal fuzz guitar and wobbly organs. What distinguishes "Archipiélago 32' " from the rest of the crowd is their odd, progressive sensibility that sees most of these tracks stretched well beyond their expected two and a half minute running time, by adding unexpected and often quite lengthy exploratory codas and bridges.
Really, really good. Download it here:


And while we're talking freebies, Beaulieu Porch's first two albums of quality "Hilly Fields" meets "Sgt Peppers" pop psych are both currently available as free downloads. If you haven't heard them, you're missing out! Get them here.