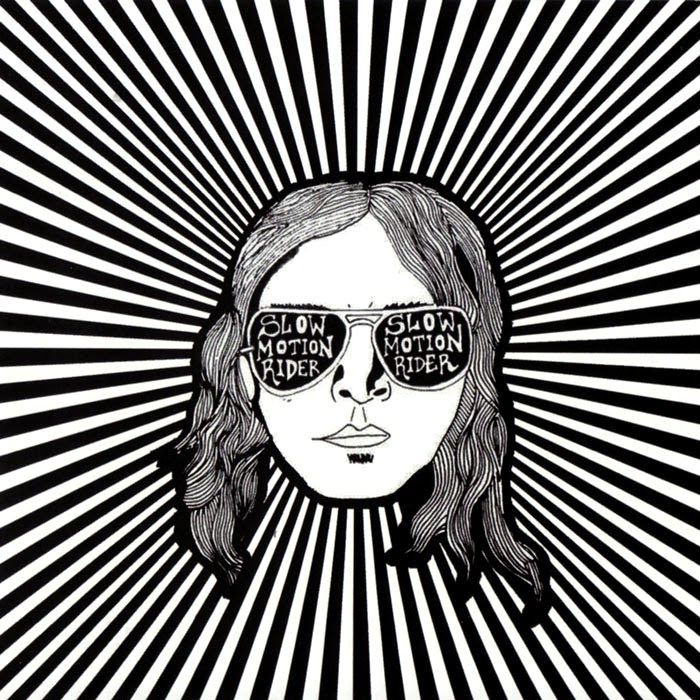 Slow Motion Rider hail from Los Angeles and there is a definite Californian quality to their blistering stoner rock vibe. This is not the sunny surfer sound of the Beach Boys or any of that Laurel Canyon, hippy folk crowd. This is the sound of blasting through the desert at night in a black primered Chevelle - blind drunk and raging on amphetamines and something evil the biker dude claimed was cocaine. This is the sound of consciousness strobing, served up with blurred vision and the smell of gasoline.

"Hold Your Hand Out to the Sun" kicks off the dream and to my ears, I feel like I’m entering into a story already in progress. Walls of guitars and bass establish a groove and serve as a perfect introduction. "I Can’t Feel Anymore" (with its fuzz bass and reverbed up guitar and vocals) rides a Hammond B3 chord into inner space. By the time they get to the guitar solo outro, I’m sold.

"Ride You Purple" (nice, Alan) lives up to its title and slinks along in its denim and leather majesty, suggesting Blue Cheer at times and setting the table for the Hendrix inspired "Love Will Find a Way". One can almost see brother Jimi stepping right into this song at any moment to take his solo. The Hendrix vibe is even stronger in "Wondered Why", but the band wisely brings the pace down for the excellent "Destination Nowhere".

"You’ll Never Know" is my bet for best track played live. The song has an awesome driving beat and the energy that throbs along in earlier songs finally has a chance to get out into the mosh pit. "The Key" is ushered in with a surprising mellotron, which works incredibly well to set up the big guitars and echoed out vocals of the chorus of the song.

"I Like The Way You Look" has a very late night feel to it. The staccato kick drum and arpeggiating guitar create an almost mournful feeling for another night lost to the abyss. "The Kids Ain’t Got No Soul" closes out this fine debut, and it’s a fitting exclamation point on this long day’s journey into night.

Stoner rock is one of the most overdone sub genres of psychedelic music. It’s a guitarists dream, but too many bands forget that all the wanking in the world won’t cover up poorly crafted songs. Thankfully, Alan Stone and company learned that lesson long before taking us on this trip. This is stoner rock done RIGHT.

I have to give credit to the Committee to Keep Music Evil. They’ve scored another direct hit with the addition of Slow Motion Rider to their roster.

Available directly from The Committee to Keep Music Evil.