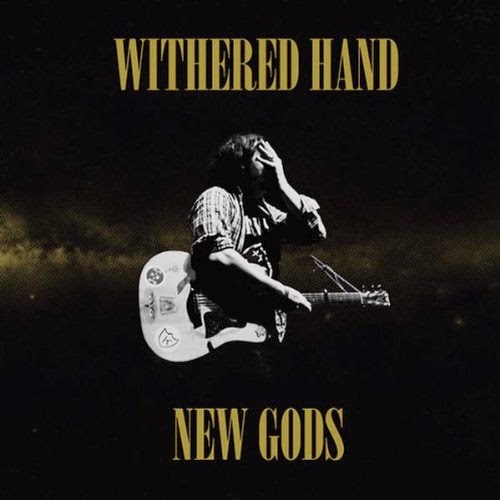 "New Gods" exists at a T-way intersection of first wave, roots-inflected classic rock and the next wave of roots-influenced indie music. It's like a spectral ballroom, with Shakey lazily strumming, the Boss on lead vocals; John & Paul provide some harmonies. James Mercer sits in; Julian Casablanca drops by, strikes a pose. The ghost of Gram Parsons is spotted in the catwalks, and Conor Oberst gives chase.

Yes, you have heard something like "New Gods" before. Vitriol has rained down like napalm upon modern musicians, saying there's nothing new to be said. That as a generation, we are doomed to endlessly recycle and rehash. That we'll never be as good as their generation.

This idea raises some interesting thoughts on music history, about the role that music plays in society, and the myth of progress. There seems to be a thought that music is only valid if it's completely original, emerging from the VOID. That it's not valid to be in love with your record collection. All of this suggests music as a commodity, to be hawked out of the back of a truck. Gotta have the newest, flashiest thing!

This idea is relatively new in human history. Classically, it was more important to master a craft than to take credit. Master potters and rug weavers wouldn't even sign their work.

If you're a musician, you will grab whatever you can get your fingers into, whether that's the sound of a babbling brook or your Dad's record collection. Ultimately, as a generation, we've got to contend with our influences.

Withered Hand is basically wrestling with the same problem as every musician ever; how to organize notes, chords, rhythms, instruments, words and voice, to express themselves. And yes, Withered Hand does sound like other things. There are moments, listening to New Gods, when I was reminded of The Strokes, Death Cab For Cutie, The Shins, Sufjan Stevens, Bruce Springsteen, Neil Young, even Mount Eerie. "Love Over Desire" is a dead-ringer for country- era Bright Eyes, before seamlessly sliding into The Beatles, which then becomes Led Zeppelin. This seems to be done knowingly, as nearly half of the songs on this record have explicit quotes from classic songs, the "Love Love Love" medley in "Love Over Desire", "The Gilded Palace Of Sin" lyric from "King Of Hollywood", a reference to The Flying Burrito Brothers, "White Light/White Heat," from the song "California," to the Velvet Underground, played with Neil Young's lazy junkie strum.

Dan Willson is clearly in love with his father's record collection. And while the most recent generation of classic music lovers choose to bury their adoration in layers of noise, hiss, grit and reverb - whether that's the gooey-cassette disco of Arial Pink or My Morning Jacket's elegant, elegiac southern rock, or The Jesus And Mary Chain's burned ephedrine greaser snarl, Withered Hand has played it straight and clean, lushly layering acoustic + electric guitars, mandolins, organs and gorgeous background vocals to make a truly classic record.

I have heard it said that collage is the most honest form of 20th century art. Dan Willson is clearly a master collagist, moving and re-arranging ephemera and bric- a-brac to make something wholly unique and personal.

Like any master of form, the true heart lies in the embellishments. A work of art may be inspired by another, but it is always its own thing, inhabiting its own world. The nuances really shine through in the lyrics on "New Gods", with love songs to his guitar ("Love Over Desire"), junkie lamentations ("California", "Life Of Doubt"), tarot cards and paradigm shifts; New Gods and faded beauty queens.

When you peel back the layers, and "New Gods" exists in its own universe, is when there's that sky-cracking moment, when your heart bursts like a newborn phoenix, like a setting sun, like the moment when Willson's voice cracks like a rusted hinge on "Life Of Doubt", or when the crystalline choir emerges on "New Gods". For the Angel is in the details, and you've never set foot in THIS river before.

Almost every song on New Gods is in a different style, but mostly sticks to a laid- back country groove, except for the choppy piano charge of "Heart Heart", which is the only song I'll forgive shoutalong gang vocals, as I love the rest of the record. For lovers of roots-infused classic rock, new and old, all hail the new thing!

Available on vinyl, or CD.