The Hanging Stars - Over The Silvery Lake 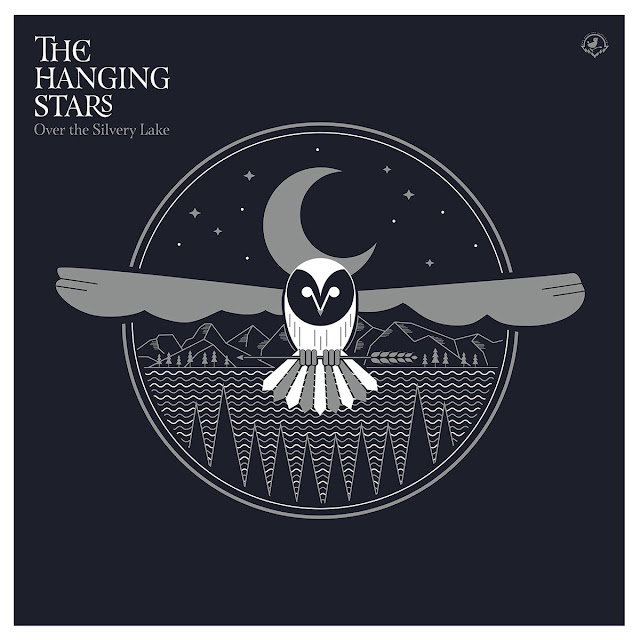 I've been following the progress of London's Hanging Stars with great interest via their first two 7"s (reviewed here and here), and am pleased to report that their first full length (also released by wonderful Indie label The Great Pop Supplement) more than lives up to the promise of those singles. And for those who missed those long out of print singles, their three best tracks are reprised here. This review is rather late in the game as "Over The Silvery Lake" has been out for a few months now, so apologies to both the band, and you dear reader, but if I may rely on a somewhat tired cliche, some things are worth waiting for, and "Over The Silvery Lake" is certainly getting better with age.

Partially recorded and mixed in Los Angeles by Byrds obssessive Rob Campanella (of The Quarter After), it sounds like the band soaked up a lot of sunshine while they were there. How else to explain such lush, sunny compostions from a London based band? Updating the Byrds / Burritos sound with a more contemporary flavour, "Over The Silvery Lake" nestles in nicely at a snug midway point between Active Listener favourites Kontiki Suite and the Laurel Canyon revivalism of Jonathan Wilson. Given those comparisons, it's clear that this is going to be an absolutely lovely sounding album, and it is, with a well layered sound that allows all of the instruments their own space to shine, with some lovely weeping steel guitar, and Richard Olson's vocals pushed to the forefront. The term cosmic American music fits perfectly here, with some lovely psych-folk tinges nicely glossing over the minor technicality that the year's best Americana LP isn't even by American artists.

There are trace elements of all sorts to be found here - the Byrds, Grateful Dead etc. - but "Over The Silvery Lake" is a very fresh sounding album too, timeless without implying any sort of retro approach. The songs are simply arranged in a way that best exemplifies their best qualities. And lovely songs they are too, with strong harmonies, big choruses and robust arrangements, perfectly sequenced  and paced to make the whole stronger than its constituent parts. That being the case, I'm not going to single out any particular tracks for praise, as the album works best when devoured as a whole. You can do so digitally through the band's Bandcamp page below, while the vinyl release from the Great Pop Supplement appears to already be sold out (as is normal for that label's releases). And there's a CD version avaialble here.