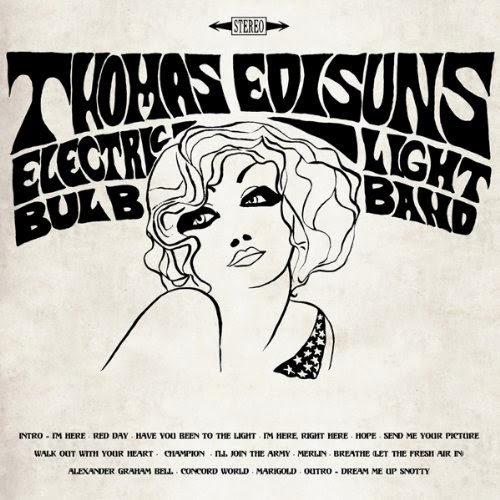 Adventurous readers may be familiar with Thomas Edisun's Electric Light Bulb Band from the appearance of their "Common Attitude" 45 on the excellent "Aliens, Psychos & Wild Things" comp a few years back, but few will realise that they recorded an entire albums worth of material that didn't see the light of day until recently, courtesy of a Gear Fab CD reissue.  Now Guerssen have come to the vinyl lover's rescue with this lovely vinyl pressing of the album - as close to how it was originally intended as we're likely to ever get.

After being blown away by "Sgt Peppers", TEELBB (as we will call them from now) resolved to make their own album length psychedelic statement and entered the studio in 1967, recording the contents of "The Red Day Album" over a single weekend.

The tape loop trickery of opening track "I'm Here Right Here" picks up right where Lennon's looped outro at the tail of "Sgt Peppers" left off - as bold a statement of intent as you're likely to find anywhere.

Naturally the rudimentary studio production available to TEELBB means that "The Red Day Album" is less overtly psychedelic than it's direct influence, but strangely enough manages to foreshadow the sound of the later studio work of the Beatles, the early solo works of Lennon and (particularly) McCartney and the legion of followers that spawned the powerpop genre in the seventies. I'd be tempted to claim this as a major inspiration for a number of these seventies power pop artists if I wasn't so sure that they couldn't have heard this at the time, so clearly ahead of their time, if not actually influential.

And it's not just the sound that they've captured so effectively here - the songs themselves are harmony drenched marvels that range from clear stand out "Red Day" (a perfect piece of Macca / Emitt Rhodes style piano pop with an affecting winsomeness) to the more advanced and hard rocking "Champion" (sort of Rockin' Horse meets the Beatles Twickenham sessions), to the Ringo-esque "I'll Join The Army".

Also includes a repro of their rare “Common Attitude” / “No one’s been here for weeks” 45.

A miraculous feat of crate digging and an essential purchase that will stand proudly alongside albums from the likes of Emitt Rhodes, Colours, Lazy Smoke and Rockin' Horse in your Beatlesque collection.

Available here, from the fine folks at Norman Records.

None of the standout tracks from "The Red Day Album" are available to stream unfortunately, but you can check out "Common Attitude" below - it'll give you a rough idea, but in my opinion there are much higher peaks to be scaled on the album itself.