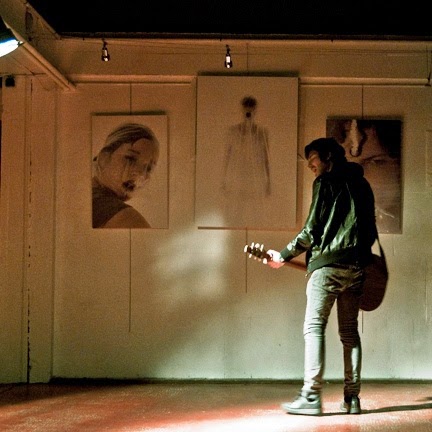 With this deceptively low key and underground release My North Eye have arguably created a stand out psych folk masterpiece. Recorded in one day in Normandy, France in 2013, each song is a perfectly crated piece of melancholy that catches the listener firmly in its emotional grip. Essentially the work of one man, Yann Lafosse, the album affects and arrests in equal measure and proclaims the arrival of a major talent to the folk and psych scene.

The album opens with a version of the gospel standard ‘Wade In The Water’, the double tracked lead vocals adding a sense of approaching dread to a backdrop of wheezing organ and gnarled distorted fuzz guitar. Sounding not unlike a demented Walkabouts, My North Eye make this track into their own apocalyptic vision. In contrast ‘Love Just Love’s harmonium and plaintive vocals are heartbreaking in their despondency and simplicity. Not a note is wasted here and the lack of over embellishment just adds to the emotional power. Similarly ‘Butterfly’ (with its repeated single drumbeat the sole backdrop to Lafosse’s vocal) is deeply engaging, reminding this listener of Black Heart Procession’s classic ‘1’ album. ‘Lullaby’s shimmering and celestial organ frames a desperate paean to the listener to ‘sleep, close your eyes’ as cosmic winds circle all around. This would have been the perfect soundtrack to the ending of Lars Von Trier's ‘Melancholia’; it is as heartrending as it is bleakly beautiful. ‘Walk’ begins with a single repeated drumbeat, a stagger of a song depicting an exhausted and worn protagonist before the defiant chorus brings a delicately picked acoustic into the frame. This is hugely affecting material and reminds one of Nick Grey’s desperate and heartworn opus ‘Thieves among Thorns’. ‘Your Pain Is like a Drone’ is an epic nine minutes of pain and sorrow; the naked harmonium emphasising the raw and stripped back emotion expressed in the song. A tense and unsettling crescendo builds as the volume grows and reverbed discordant and wracked guitar howls into the darkness. The track is physically and emotionally draining yet is utterly compulsive and mesmerizing. Fans of Michael Gira’s work with both Swans and Angels of Light will find much to like here. 'Metonimy’ follows as the calm after the storm yet is still much wrought and greatly resigned. Indeed, the whole album begins to take on the form of a song cycle or concept and it’s not hard to imagine each of these songs being sung about the same person. Handclaps, the buzz of harmonium and shimmering strings create a melancholy sing-along as the tracks ends repeating ‘you refused to see’. It’s a curiously uplifting moment and illustrates the strong emotional palette that My North Eye are working from. ‘Nothing Lasts’ strummed doomed vision is a powerful piece of Americana; effectively the finale of the album, it offers no solace or happy ending but does provide an atmospheric and cinematic conclusion with its ringing guitars, twilight chimes and hazy strings.

Make no mistake; this is a hugely accomplished album and it being the work of one man’s vision makes this all the more so. There is heartache here but also some of the most affecting and beautiful music you may ever hear. In future years this should be filed next to Peter Hammill’s ‘Over’, Smog’s ‘Red Apple Falls’ or Big Star’s ‘3rd’as one of those soundtracks to late, candlelight nights of the soul. Available now as a limited edition with splendid handmade artwork by label Reverb Worship. Essential.

CD and vinyl available here. Digital download and stream below: