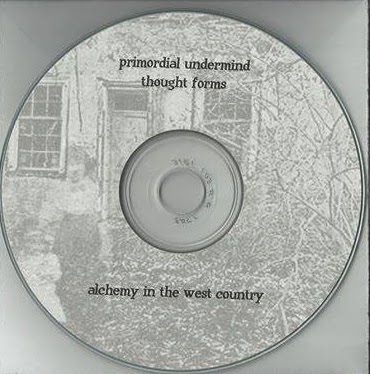 Abstract and freeform, the new album by Primordial Undermind /Thought Form ‘Alchemy In The West Country’ is a psych noise ritual that, although uncompromising and strictly for the brave, amply rewards with each repeated listen. For a noise and freeform instrumental work it is also curiously meditative and is properly psychedelic in its warped and cosmic elevations and voyages. Primordial Undermind should need no introduction; the Californian collective having been involved previously with such psych giants as Nick Saloman, Tom Carter and Fit+Limo as well as being a prominent Ptolemaic Terrascope favourite. Their Facebook page states ‘genre is a crutch’ which gives a sense of their experimental bent and genuine mood of freedom and creativity. Thought Forms, a young English band whose sound veers from ethereal doom to all out guitar noise, are a fine match for Undermind; having been a part of Adrian Utley’s guitar orchestra and no stranger to epic freeform freakouts themselves, they combine with Undermind to create something new and radically different than the sum of its parts. In 2011, having toured together, both bands found themselves with a day off and a monumental jam in a band member’s Wiltshire home began. This album is the document of that day.

Starting with picked guitar and a discordant haze of percussion and voices, ‘On the Wine Dark’ quickly becomes a James Blackshaw-esque drone epic. Freeform slide guitar enter and departs over delicate and rapid cascades of arpeggios, the clangs and sawing of violins increasing in volume to produce a choir of pure noise. Like a mid-western (or west midlands) Einsturzende Neubauten, the Americana tinged discordancy is at once thrilling and unsettling. ‘Rattle the Bones’ picks up where its predecessor left off with a waterfall of percussion and bells, scraping strings, chimes and feedback hum. Almost abruptly it ends, leaving the listener disorientated and unsure of what has just been experienced or heard. ‘Helicate’s rock n’roll bass notes motor the track along krautrock style before a ritual drum beat enters, the clatter of cymbals joining in to create something akin to a noisier Popol Vuh in their 70’s heyday. Indeed there is also an element of Faust at work here in the sheer inventiveness and sense of deranged creation, perhaps with a hint of the Velvet Underground’s ‘Black Angel’s Death Song’. A twenty minute epic, the song slows and surges towards a coherent and powerful finale. ‘Cauchemar’, with its finger cymbals and bells, is both hypnotic and has a real sense of dread. Swathes of noise pass over the echoing chimes and drones, a tension building within the track as the noise builds and ebbs. A whirring noise emerges as do several muddy cosmic drones and chants as a steady metronomic beat comes to the fore. Listen to this in the dark on headphones for maximum effect; its Nurse With Wound style scrapes and unexpected sounds will haunt you for days afterwards. Finally, ‘Anathema Marantha’ adds what sounds like an electronic shimmer to a sinister perpetual drone before the sound of something clockwork being wound up appears, the track growing in a loud glow of percussive madness.

This is alchemy indeed; from the sum of its parts something was converted that day in the West Country into aural gold. Take a trip into the abyss with Primordial Undermind/ Thought Forms, you won’t know where you are going but the journey is unforgettable.

Available now in a limited (to 50 copies) edition from Reverb Worship in a lovely handmade sleeve.