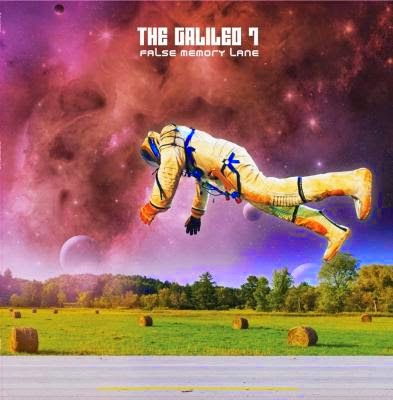 Those of you with long memories may remember that I really enjoyed the last album by The Galileo 7, and guess what? There's a new Galileo 7 album out, and I'm loving this one too. Happy days!

The Galileo 7 is of course the songwriting outlet for the venerable Allan Crockford. Most well known previously as bass player in the Prisoners and the James Taylor Quartet, Crockford has his his fingers in many other Medway pies to the point where he's become a bit of a legend down that way.

All of which goes a long way towards explaining just why "False Memory Lane" is such a fine brew. None of this bandwagon jumping that you see going on with a lot of the major label slightlydelic artists of today, Crockford is the real deal and the Galileo 7 has an honesty and directness that can't be fudged. "False Memory Lane" continues on nicely from "Staring at the Sound" with a perhaps slightly rebalanced ratio of vintage sounding power pop to psychedelia that gives this a more contemporary edge than its predecessor.
Crockford's songs, and the conviction of his performances are the key elements here though - these aren't the tentative doodlings of a sideman, but the confident outpourings of a born frontman who has had the grace and humility to allow others their time in the limelight before claiming his own moment or two. Top band too, with the Higher State's Mole on bass and great vintage organwork from Viv Bonsel providing able support.

Highlights then? Well initial spins would lead you to believe that this is a frontloaded album with "Your Cover is Blown" and "You're Not Dreaming" providing immediate fixes early on, but subsequent plays reveal the moody baroque pop of side two's  "Fools" to be a prime candidate for most substantial cut here.

And I won't pretend I understand what's going on with that nifty cover art, but I'm pretty sure that's the same field as on the cover of "The Other World of the Soundcarriers", perhaps the most psychedelic field in England?

Available on vinyl, digital, and CD.