Music From The Motion Picture "The Goatman" Performed by the Unseen 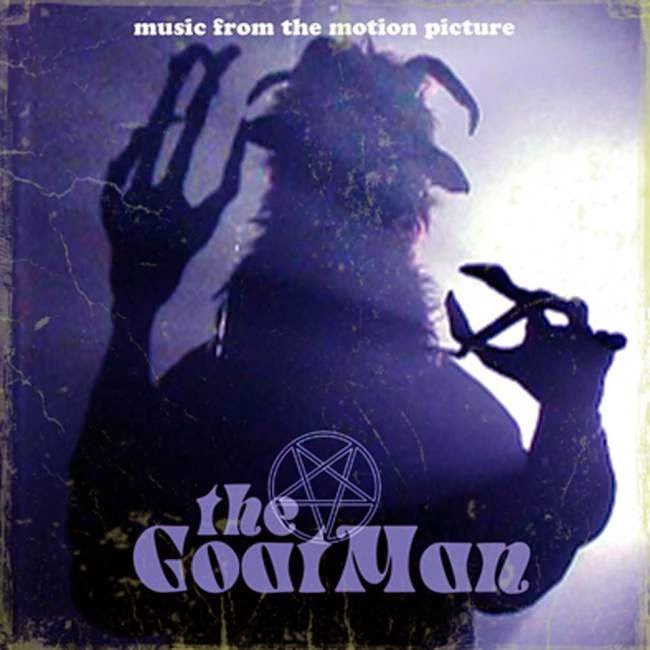 The soundtrack to long lost and almost forgotten 1970’s cult horror ‘The Goatman’ finally sees the dark light of day after several decades lying cobwebbed in the crypt. Ostensibly a movie about a young couple who on moving to a seemingly idyllic Somerset cottage encounter the terrifying and fatal vision of The Goatman, it has become over the years a folk horror film legend. Any attempts to find an original print of the film have failed, sadly leaving The Goatman as a word of mouth cult classic. This has only been made more so by director Simon Grundig meeting an untimely and mysterious demise, apparently in circumstances too horrific to recount.

However, many years later a chance meeting between two young horror aficionados, the unnamed author of the Unseen Horror blog (www.unseenhorror.wordpress.com) and one Septic Boaby, led to an afternoon of hazy reminiscing and recollection of seeing Goatman in their youth. This then led the intrepid pair to search for and discover the long thought lost Goatman original soundtrack as performed by The Unseen; a duo consisting of Simon Magus and Harold Legg. Both Magus and Legg are credited on the sleeve with ‘electronics’ and their work certainly falls into the category inhabited by horror soundtrack luminaries such as John Carpenter, Goblin and Acanthus, particularly their music for Jean Rollin’s celluloid chillers such as ‘Les Frisson Des Vampires’. There are also echoes of Orville Stoeber’s masterful accompaniment to ‘Let’s Scare Jessica to Death’. Opening track ‘Eerie Meadow’ recalls Carpenter’s music for ‘The Fog’ in its sinister, synthesised glacial minor key brilliance. This is genuinely chilling and expertly draws the listener in to a landscape that is apparently normal and sedate yet is chock full of hidden, unknown and unspeakable goat-like terrors. The track ends with an alarming reverberating drone that leads us directly into the echoed glockenspiel of ‘Newlywed Arrival’, as protagonists Frank and Susan disembark at their (supposedly) tranquil Somerset holiday home. A single repeated piano note alerts us however to the caprine capers and darkness that lies within. ‘Footsteps outside the Cottage’ adds suitable tension and the sound of said footsteps (or hoof steps?), inhuman breathing and the screeching of crows mixes with a disturbing electronic shimmer. ‘Susan’s Dream’ wavers in and out of psychedelic eeriness; a single ritual drum beat echoing again and again against some acid folk style flute and reversed tape loop as her dream unfolds.

A description of the lost footage describes this sequence thus;

Susan is wandering through a meadow, and she hears a young girl singing; the sound is strange, reversed, the feeling becoming weird and dreamy, hallucinogenic. She sees the little girl sitting in the long grass, and as she approaches her, the girl turns around. But it is actually a really small old lady with coal-black eyes and great big long bony fingers. She reaches out to grab Susan, who runs away. The sequence is filmed in grainy, old-school slow motion, and the sound of a heartbeat only adds to the creeping terror. The thing is gaining on her, grabbing at her, and tearing at her clothes. Susan makes it into the woods and just as she thinks she might be safe, she becomes aware of being surrounded by malevolent entities, whispering all around her. She awakens screaming…

‘Melancholy Glade’ adds synthesized strings to the increasingly oppressive atmospherics before ‘Séance in the Farmhouse’ takes us further into creeping analogue dread. Mention must be made of the superb electronica that is featured on this album. Fans of Pye Audio Corner and Ghost Box’s roster of Belbury Poly and The Advisory Circle will find much to enjoy here. The majority of the soundtrack was reportedly recorded on electric harpsichord, vibraphone, vcs3 and Mellotron Mk11 and as such contains the sweeping icy beauty so redolent of bands of the era such as King Crimson and The Moody Blues. Other instruments appear as required, adding to the palette of the soundtrack; indeed ‘Passion in the Woods’ introduces Hammond organ and a rather funky guitar line to adorn one of the more fruity sequences in the film. ‘Shadows at Hunter’s Lodge’ is more akin to the BBC Radiophonic Workshop as crackles, electronic swirls and bleeps and bells flange around the speakers like a suitably demented Quatermass or Dr Who soundtrack, before stately guitar sounds and drums enter to proclaim the hircine terror within. ‘Surreal Rural Sequence’( in which Frank dreams of being chased by Susan with what appears to be the head of a goat) adds sinister backwards children’s voices; these lend a chilling hue to the otherwise tranquil birdsong until glistening electronic chimes reverb throughout to disquieting effect. The additional sound of a heartbeat only adds to the nightmarish atmosphere conjured by Magus and Legg (an unlikely looking pair going by the website, Legg himself bearing an uncanny resemblance to comic warlock Alan Moore). ‘Strange Sex’ is, belying its descriptive title, a rather beautiful orchestral mellotron and flute epic and, to this listener, one of the high points of this demented and underrated opus. ‘Betrayal’s choral voices are deeply disturbing; do not listen to this in the dark, actually on second thoughts do – it is the perfect ambience in which to enjoy the delights of ‘The Goatman’. Arcane drones evoke a cavernous lair in which the anthromorphic beastie himself dwells. ‘The Goatman and his Maidens’, as well as being the best title for a song I’ve heard in a long while, is a tremendous scream of static, white noise, radio (and animal) howl. Nigel Kneale would have commissioned these chaps for any of his Quatermass or TV chillers had they not been so unknown and, well, unseen. A crescendo builds in the madness until the end title ‘Lullabies’ closes the album, its bass led harpsichord and echoed vocals a song the likes of which Jeff Wayne would have killed to write.

Who knows if the discovery of this music will lead to a print of The Goatman movie being unearthed? By all accounts it is a terrifying and unusual film in the vein of The Wicker Man, Blood on Satan’s Claw and other British classics of the era. So much mystery and misinformation exist around the existence of the film and its troubled making that it is already a cult classic without having been seen in decades, instead only half remembered from late night TV viewings.

As a soundtrack this is essential; it ably sits amongst the revered soundtracks of other 70s cult horror films that you should already have on your shelf by the likes of Paul Giovanni, Luboš Fišer and Marc Wilkinson. It was clearly a labour of love and is hugely enjoyable on its own as a piece of music. Reverb Worship have kindly made this lost classic available again in a limited edition, the sleeve beautifully replicating the original movie poster. Enter the world of The Goatman; you will be both terrified and pleased that you did. No kidding.

Available on CD from www.reverbworship.com