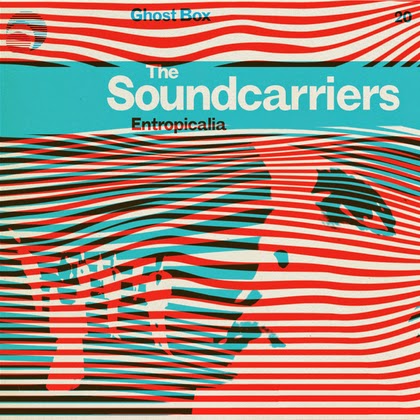 In a move that sees them stepping in a slightly different, but complimentary direction, the bastion of English Hauntology, Ghost Box have released the Soundcarriers third album "Entropicalia"(fourth if you include the instrumental precursor to this album "The Other World Of the Soundcarriers").

When the Soundcarriers first burst upon the scene a lot was made of perceived similarities to Broadcast - a band that many critics (myself included) are always looking for indirect descendents of, but as the Soundcarriers have refined their unique blend of motorik rhythms, quintessential Englishness, sixties cinema, sunny Tropicalia and vintage Gallic pop, they've shrugged off the limitations of comparisons and ended up in a very odd field, with very little in the way of peers, but plenty of admirers.

Unusually for an album that follows on from an instrumental statement as strong as "The Other World of.." undoubtedly was, "Entropicalia" may well be the Soundcarriers most vocally dependent album yet. Which is not to say that the vintage cinema grooves and Canterbury influenced prog/psych of previous albums are absent or even diminished, but that the material on "Entropicalia" showcases songwriting chops every bit as sharp as their already acknowledged instrumental virtuosity and attention to vintage detail. Simply put these songs function just as well on a left-field pop front as they do as instrumental jams, with tracks like "Low Light" and "The Outsider" driven as much by the glorious sunshine harmonies of Leonore Wheatley and co. as they are by the inventive, often krauty rhythm section.

There's guest appearances by Jesse Chandler of Midlake and Elijah Wood for trainspotters, but it's the core group of Adam Cann, Paul Isherwood, Dorian Conway and particularly Wheatley that really gel and spark here, forging an album that works on so many different levels - we've already heard the majority of this as a storming instrumental set, but one gets the impression that the songs on "Entropicalia" could be just as easily stripped back to vocals and the barest of accompaniments and succeed just as readily.

Pretty great, and certainly their best offering so far.