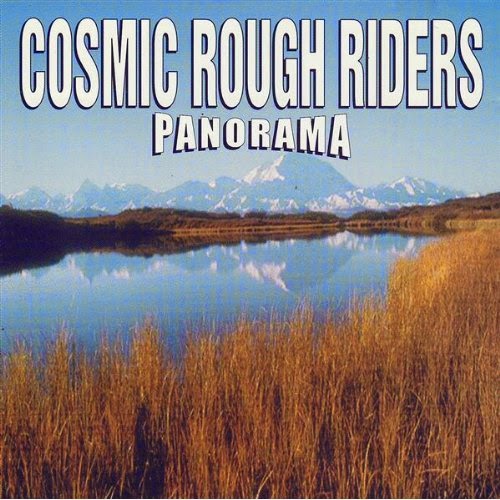 When it was originally released back in 2000, the Cosmic Rough Riders second album "Panorama" had the cream of the U.K music press (Uncut, Q, Mojo etc.) falling over themselves to announce its brilliance, but despite the critical adoration, the subsequent signing by Alan McGee and the obvious charms of the songs themselves, this never translated into the sales that music like this would receive in a fair and just world.

Fortunately Markus Holler (a bit of a jangly harmony pop addict himself) has given us the chance to revisit "Panorama" on vinyl for the first time (unbelievably).

A Scottish band with a convoluted personnel history (let's just say that singer / songwriter Daniel Wylie basically is the Cosmic Rough Riders), on their second album they added a whole bunch of sunny California and West Coast to their melodic Teenage Fanclub jangle, with Wylie writing the best songs of his career (although his subsequent solo career has been pretty flash too).

There's an immediate appeal to these songs that makes it easy to see why they were tagged the "next big thing", but harder to work out why they didn't stick in the public consciousness of the time. Certainly the open adoption of the vintage sixties influences on display here was unusual for the time, and may have been enough to confuse the casual punter into buying the latest Travis album instead, but tracks like "Revolution (In The Summertime)" and "You've Got Me" tick all of the right catchy and melodic boxes to be players on radio, and there's plenty of depth beyond the surface level hooks;  "Afterglow" dabbles in alt. country harmonies more effectively than anything you'll hear this side of the Jayhawks, but it's "The Gun Isn't Loaded" which packs the biggest punch with its spot on Eastern psychedelia easily recapturing and redefining "Within You Without You" for a contemporary audience.

Let's get it right this time and buy it, huh?