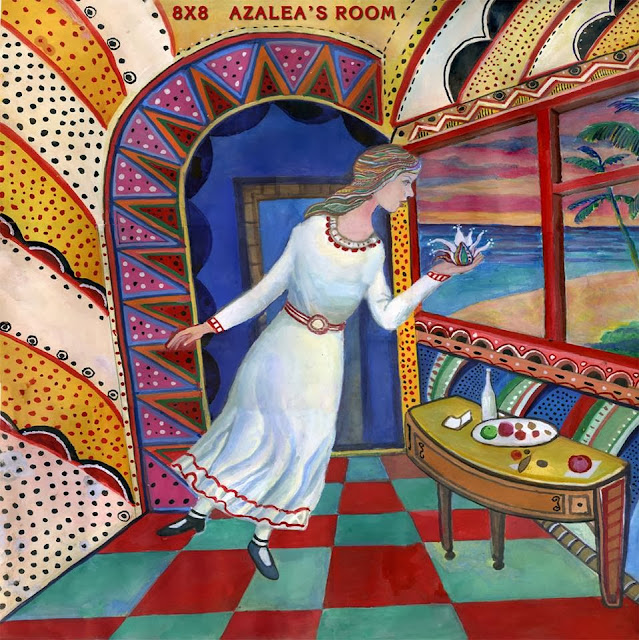 8x8's debut album "Anatomy of an Apricot" was one of my favorite releases of 2011, a breezy Beach Boys / Beatles influenced, A.M radio love affair that sounded like the work of a band at the peak of it's powers - all the more impressive as it was the work of just two men, who lived at opposite ends of the planet and had never actually been in the same room together.
To say "Azalea's Room" has some pretty big shoes to fill then is a bit of an understatement. More like those enormous steel capped boots that feel weighted to the extent that you'd need hydraulics to lift them, but miraculously these two have managed to make the goose lay a second golden egg.
No more mixed metaphors now I promise.
Obviously "Anatomy of an Apricot" hit an early peak, and simply sticking to that formula wasn't going to be enough to give "Azalea's Room" the distinct identity of it's own that a sophomore release needs to survive in this cut-throat, Pitchfork worshipping world. Fortunately Lane Steinberg and Alexander Khodchenko (they're the two 8x8 blokes, don't you know?) have been around long enough to know that you can't stand still and expect to be taken seriously, and here show some serious growth in a number of areas without abandoning the distinctive baroque pop sensibilities that sugarcoated our earlugs first time around.
So while delicate pop miniatures like "Ice Wings", the Beatlesque ballad "Code Name Jacqueline" and vintage harpsichord pop fare like "Dr Winkler's Hands" could make a fine home for themselves on "Anatomy of an Apricot" there's also plenty of room for an emotive crack at Dylan and the Band's "Tears of Rage" (featuring home recording guru R. Stevie Moore, no less), the groovy eastern rock stylings of the title track and perhaps best of all, the moody bedsit melodrama of "Laws of Attraction".
I'm not naive enough to assume that stardom beckons of course, but there are certainly a few more attentive sets of ears that are going to be well pleased to make the acquaintance of this particularly fine album.

To be released in October.