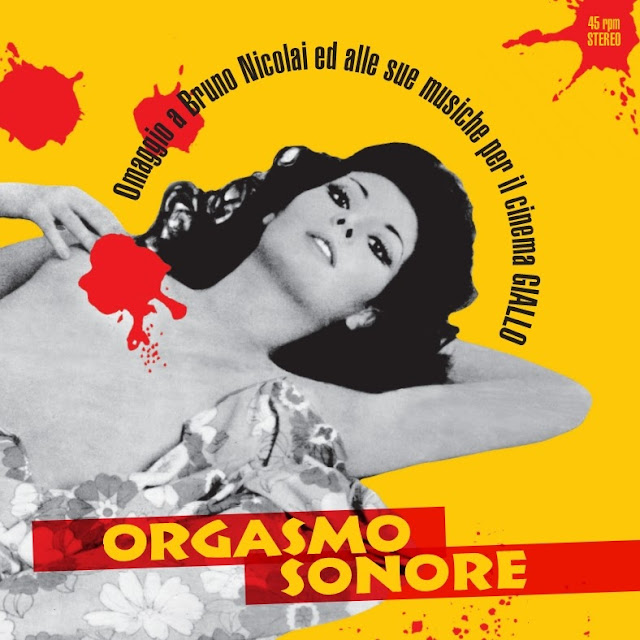 François Riendeau deserves a medal for his efforts to introduce the music of euro-horror soundtrack pioneers to a wider audience, which he's already done an admirable job of with two volumes of music associated with giallo, polizei, and euro-horror.
Now for the first time he turns his attention solely to one artist, and Bruno Nicolai is the lucky and thoroughly deserving object of these attentions, and indeed affections.
"Tribute to Bruno Nicolai and his music for Giallo films" (which I believe the title translates to) cherrypicks the best moments from five of Nicolai's best Giallo scores, and runs them through the incomparable Orgasmo Sonore filter with undeniably impressive results.
Known primarily for his working relationship with Ennio Morricone (he often conducted Morricone's scores), his own prolific output is certainly underappreciated, and to my ears is more consistently eloquent than Morricone's work from this period which great as it undisputedly is, often sacrificed melody for atmosphere, resulting in effective film scores but less replay value.
Riendeau's selection and interpretation is impeccable here, ably demonstrating Nicolai's range which incorporates creepy, wordless nursery rhymes ala "Deep Red" or "Rosemary's Baby", sweeping strings, something that sounds an awful lot like a cimbalom (the hammered string instrument used to great effect in John Barry's "IPCRESS File" score), moody post-rock guitar arpeggios that wouldn't sound out of place on a Mogwai record, and even the odd excursion into guitar prog.
Nicolai was definitely ahead of his time - while Riendeau's interpretations accentuate the most effective elements of Nicolai's scores, the fact is that these diverse and forward thinking elements were all there in the original scores.
So a success on two fronts - firstly as a hugely enjoyable listening experience in it's own right, and secondly as a showcase of Nicolai's genius, which expertly balances exceptional melodic clout with an ever present whiff of the black leather glove.