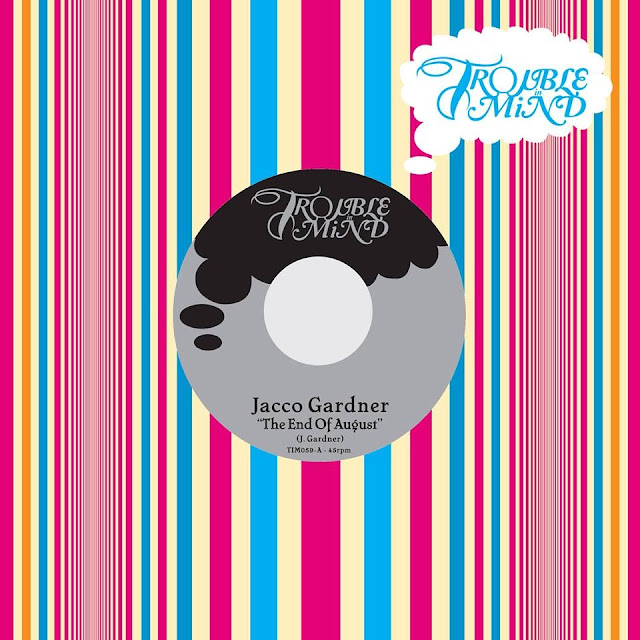 Three excellent single releases from Trouble in Mind this month:

Jacco Gardner "The End of August" / "Notus"
Baroque psychedelic pop poster boy seems to have been permanently on tour since releasing his debut full length in January, but somehow he's managed to find time to sneak into the studio and record these two sides.
"The End of August" is a pastoral baroque pop gem with mellotron and general loveliness everywhere, the musical equivalent of lying in a sunny wheatfield with a gentle summer breeze on your face, only without the allergies.
B-side "Notus" on the otherhand is an elaborate instrumental number which initially sounds like a throwaway but weasels it's way into your psyche after a couple of listens.

The People's Temple "Brand New Thing" / "Twice Burned"
Now this was a bit of a surprise - I've enjoyed the People's Temple's two albums, but they've left behind their garagey freakbeat inclinations for these two sides and the results are almost unrecognisable.
"Brand New Thing" has a big, classic Flying Nun jangle to it, dreamy backing vocals and an anthemic chorus that sounds like you've spent your whole life with it after the first listen.
"Twice Burned" maintains the garagey eighties vibe, albeit in a moody, minor key style backed by a more familiar trebly jangle that consolidates what came before with what they're doing now.
A very successful experiment.

Morgan Delt "Barbarian Kings" / "Black Tuna Gang"
Californian native Morgan Delt has come a long way in the short few months since I reviewed his debut E.P back here, with "Barbarian Kings" being lauded as psychedelic tune of the year by a number of people who talk of such things. Trouble in Mind have snapped him up for an LP release due early next year, and this 7" release to keep us going in the meantime.
We've established that "Barbarian Kings" is a marvel - achingly melodic with layers of weirdness, but freshly minted b-side "Black Tuna Gang" doesn't drag it's heels either, upping the tempo considerably and boding extremely well for that new L.P.