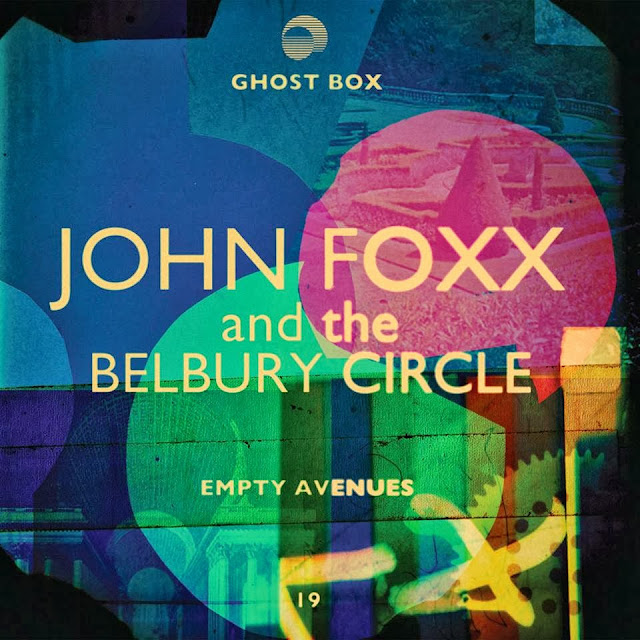 Ghost Box are showing interesting signs of diversifying in the upcoming year, with an album on the way by the fantastic and distinctly un-Radiophonic Soundcarriers, but first up is this curious and rather successful E.P.
John Foxx should of course be familiar to all as a former member of Ultravox, and creator of the wonderful synth pop album "Metamatic" while The Belbury Circle is Jim Jupp of Belbury Poly and Jon Brooks of the Advisory Circle. Quite a combo!
Not as much as a departure from the label's sound as it at first appears (Brooks dabbled with pastoral pop rather successfully with "The Signalman" from "As The Crow Flies"), this is an excellent meeting ground between Foxx's leftfield synth-pop leanings and the Ghost Box duo's archaic Radiophonia, and should please lovers of each camp, irrespective of how they feel about the other.
Warm, autumnal, vintage synth tones colour everything in a lush, melancholy sepiatone that Foxx's vocals mesh perfectly with, with both camps able to maintain the characteristics of their own sound without having to compromise, unusual in this sort of collaborative release where one side would tend to dominate.
Truth be told, if you were to remove the vocals, this could easily pass for the next Advisory Circle E.P, while the vocals in isolation are pure John Foxx - not a combination I could visualize as being successful in the lead-up to it's release, but one that makes perfect sense upon listening.
We don't live in the sort of world where this would ever have been hit-parade material, but if you fancy a more mysterious, pastoral approach to pop then this could be just what the Doctor ordered.

Available here on vinyl, here on CD, and here digitally.