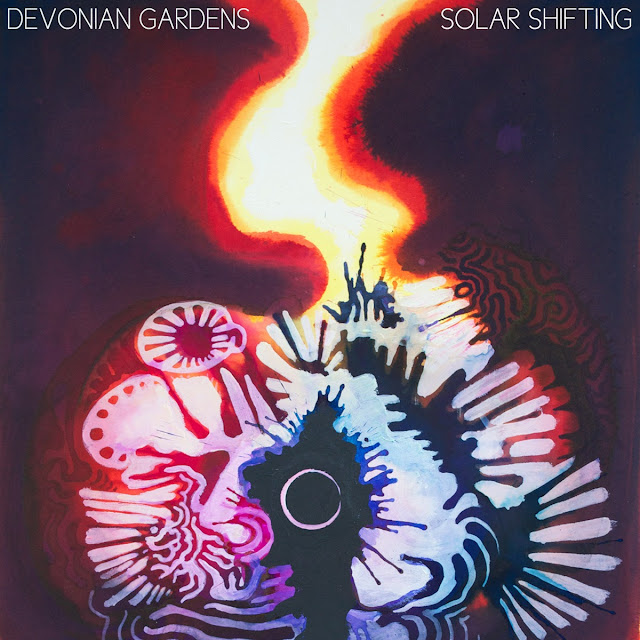 Calgary's Deadhorse have found a new home on Beyond Beyond is Beyond Records and transmogrified into Devonian Gardens. I won't pretend that I ever heard Deadhorse, but these Devonian Garden people? Pretty great.
Psychedelic rock with enough emphasis on riffs and songcraft to satisfy the straight-forward rock crowd, and enough lysergic detail to make us more discerning psych-heads salivate uncontrollably - a winning formula that few get right, usually leaning too far one way or the other to please both parties.
There's a rough San Francisco vibe to a lot of these songs - probably a lot to do with the fact that all five members sing (often in harmony), and some really nice, chunky twelve string guitar parts that evoke the late sixties nicely, but apart from that, this is a much more contemporary take on psychedelia, with plenty of muscle supplied by a particularly robust rhythm section, and an expansive wall of sound that veteran heavy psych artists had no chance of capturing, no matter how much fuzz they applied.
There's also a healthy nod to a wider range of influences too, with opener "Swallow the Sun" bearing a favorable resemblance to Tripping Daisy, while the raucous boogie of the title track (despite some wild backwards guitars) suggests that Suzi Quatro may be just as important an influence as Jefferson Airplane. And check out the furious jangle (there is such a thing) on the outro to "Goldbond". Phwoar!
This is dynamic, propulsive, psychedelic rock that suggests a great live band, and on the evidence of "Solar Shifting", one that are extremely confident in the studio too.

Available digitally here from Beyond Beyond is Beyond from October 1.