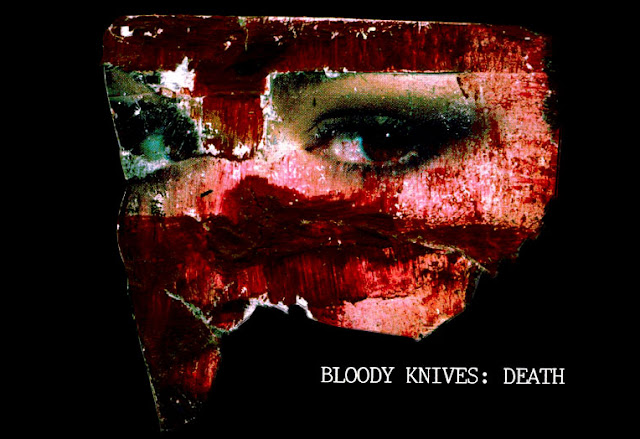 You haven’t heard any music that sounds very much like that of Austin, Texas trio Bloody Knives. At least, I haven’t heard anything—with the exception to some extent of earlier material by the band—that sounds much like the six short tracks on the band’s vinyl-only EP Death, recently released on Saint Marie Records. How often do we honestly get to say that a band or recording is truly that distinctive?
This is intense, pummeling, unsettling music, sometimes featuring sharp, startling turns and contrasts. A formidable surge of synthetic industrial sound is underpinned and propelled by classic, riveting punk drumming, with smooth, clear, almost crystalline vocals hovering above. These are components that “shouldn’t” work together and one might almost say couldn’t possibly work together as well as they do here.
Find also in this admixture touches of spacerock, a shoegaze appreciation for complexity of texture (the sound is super-fuzzy), dazzling runs of what sound like vintage prog keyboard leads, washes of noise, and a few interludes of abstract ambient beauty. An Austin outlet described the band’s sound as “rock/stoner metal/psychedelic”[1] and the metal connection has come up elsewhere as well, remarkably so given that the band works without guitars. How ever one might identify the various elements, they come together into a unique, eerie, compelling whole that can’t adequately be communicated by summing up its parts.
Lyrics and thematic content are as darkly intense as the sonic experience and are consistent with the mercilessness of the band name and the stark album title. Every track is a vignette in which a few brief phrases are repeated in an incantatory manner to evoke the viewpoint of a different, historically actual serial killer. Song names include “Waiting For You to Die,” “Kill You All,” and “Bullet in Your Head.”
One could easily expect music with such thrash, drive, and horrific themes to be topped off with vocals that are shouted, screamed, or growled. Instead we get gently legato phrases sung with cool liquid clarity. Echoing the completely unempathetic nature of the truly sociopathic mind, the detached quality of the vocal delivers a coldness even more suitable to the themes and more frightening than predictably theatric expressions of murderous rage or psychotic agony ever could have been.
The drum sound underpinning the music is just as unexpected in context as the vocal that glides atop it. Highly separated, individually processed, often sampled percussion would be a much more typical choice for a sound so synthetic and industrial. Instead we have full-on punk directness recorded with an at least largely live approach. A fairly minimal set (I don’t hear any toms but I could be mistaken) comes across with an old-school, natural, acoustic quality, in which the balanced sound of the kit as a whole takes precedence over any magnification or treatment of its individual components. Again, it works. Drummer Jake McCown, who has been with Bloody Knives since its inception, deploys startling chops with relentless ferocity, lending the music a gripping percussive dimension.
I probably would have put money down that there’s no electric bass on this EP, that all the considerable action in the lower registers is synth bass for sure. A little investigation fully shattered that inference when I found out that a tremendous portion of the sonic palette employed somehow emerges at least to begin with from vocalist and founding member Preston Maddox’s bass.
So Death offers up a sound that is not only unexpected in itself but has also been arrived at and put together in unexpected ways. Those familiar with last year’s Saint Marie full-length Blood will hear that album’s sound stripped back a bit here, with some of the shoegaze and dreampop textural layers peeled away in a distillation that somehow scales up rather than decreases the overall “bang.”
Performance photos of the band’s present incarnation show McCown with a modest kit; Maddox with bass and a minimal-looking effects array; and noise specialist and visually compelling pixie-con-cojones Kimberly Calderon attending intently to a laptop and a few boxes. The question of how any equivalent of Death’s sound is pulled off on stage by such a lean-looking ensemble is almost staggering, but judging by buzz the band’s live impact is proportionate.[2]
Death is a short EP that yields a big experience. It packs its massive wallop in under twelve minutes. Three of the tracks are less than two minutes and the longest is 2:36. Neither the shortness of the individual tracks nor the brevity of the release as a whole registered with me for the first several listens. Before I actually had a look at the running times, it would have been hard to convince me that I’d listened to less than at least sixteen intense minutes of music.
My overall sense of this effort is one of uncompromised music resulting from musicians doing exactly what they want to do, how they want to do it, following their own drives and inclinations too intently to be bound by conventions, audience-pleasing, or even their own previous habits. A refreshing authenticity pervades the music and seems to characterize the musicians and their process and methods.
As much as I like this release, I honestly felt a little battered and agitated after listening to it several times in one particular afternoon. Such is the nature of this beast. Clearly Death will not be to everyone’s taste, sonically or thematically. It’s nonetheless executed with passion and commitment and often daunting skill, and it’s genuinely unusual. For those reasons alone it deserves your ears for at least the one listen that a quick visit to Bandcamp will afford you. 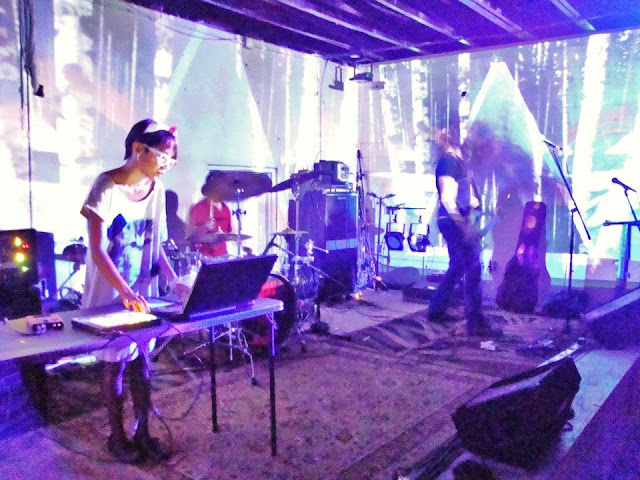