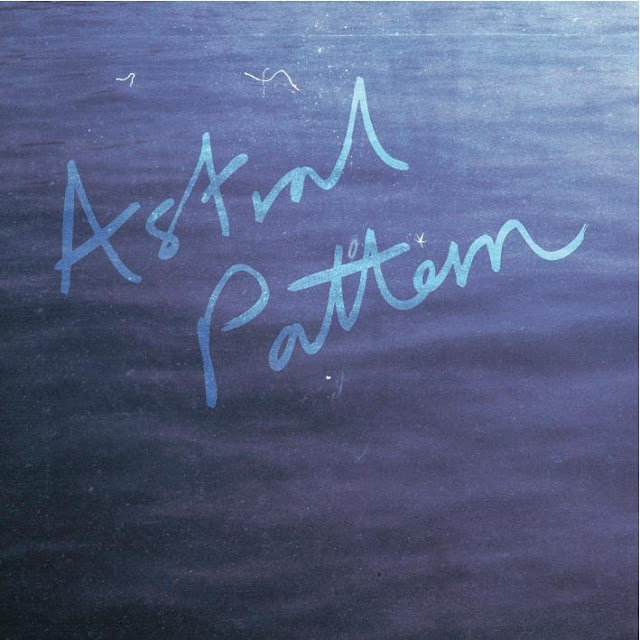 The breakup of a band, although largely a sad occasion, can often yield exciting and intriguing results from members who begin work on their own projects. Such is the case for S.C.U.M., who announced in January this year that, following a hiatus, they would no longer be playing or writing together. This was particularly sad considering they released only one L.P. – 2011’s Again Into Eyes. However, the feeling that we hadn’t quite heard enough is eased by this debut offering from three of its ex members, Melissa Rigby, Huw Webb and Bradley Baker. Astral Pattern was formed after the trio attended a Kraftwerk gig in Dusseldorf, and such gigs should be a compulsory cure for any creative blocks if these are anything to go by. Of course, there is more to this outfit than previous band material and an influential gig; it only takes one listen of their E.P. to prove that.
Light Poems was released on July 1st via the independent London-based record label 37 Adventures. Using only synthesisers and drum machines, it’s clear Melissa, Huw and Bradley are working in a different direction now, but arguably one that suits them better. Their love of German electronic music circa the 1970’s/early 80’s can be detected on this record; the vintage synth sounds coalescing into a lush soundscape that sounds more Harmonia than Kraftwerk. But there’s something else going on here. There’s a swirl of psychedelic dream-pop, a hint of shoegaze, and slight leanings towards motorik that makes this a warm and inviting listen.
The E.P opens with a shining synth line and persistent, yet soft-edged, drum beat in ‘Properties of Colour’ before leading onto the band’s debut single, ‘Sitting in the Sun’. Here Melissa’s vocals really enhance the ethereal, dreamy atmosphere of the release; helping it ebb and flow like a gentle tide so you really do feel like you’re sitting in the sun on some faraway beach without a care in the world. Although reminiscent of the delicate female vocals of shoegaze acts such as Alison’s Halo and Slowdive, the optimism, the warmth of both the lyrics and Melissa’s tone align them with the contemporary indie dream-pop of, say, Still Corners. They evoke both a nostalgic past and a bright present, contributing to the airy, melodic feel of the E.P. rather than fading into the background. In other words, it’s all a perfect partnership of drum loops, synth melodies and honey-sweet vocals.
The names of the songs themselves seem to aptly reflect the mood of the record – ‘Sitting in the Sun’ is followed by the track given to the E.P.’s title, ‘Light Poems’. The twinkling, shimmering synths are driven forward by a simple drum line as they seem to dissolve then reappear in a bright mirage of sound that appropriately conjures light reflecting from waves or the movement of colours through a prism. (How do they do it?) Following this is probably my favourite track from the release, ‘When We’re Falling’, largely down to the comforting optimism evoked by Melissa softly cooing ‘I wanna put my arms around you.’ (This consequently makes me feel like doing exactly that. To anyone or anything, metaphorical or otherwise.)
The lyrics generally achieve the effect of evoking what the music does itself. Closing track ‘Faraway’ seems like a fitting end to the record as Melissa sings ‘I’m floating away’ above a driving analogue synth. Although light and airy, full of the breeziness of summer, the whole thing doesn’t so much wash over you as wash through you. This is an E.P. to be absorbed, and as it finishes I’m left with the feeling that I’ve been on a short holiday (never a bad thing).
Astral Pattern’s debut release has certainly heightened my anticipation for future material. The band are only in the flourishes of infancy, but Light Poems is a fresh, distinctive E.P. that will hopefully be followed up with further releases, live dates and perhaps a full length at some point. Anyone keeping these kinds of bright, vintage synth sounds alive are ones to watch in my book.

Light Poems can be downloaded or ordered on limited 12” vinyl from Astral Pattern’s Bandcamp page here.