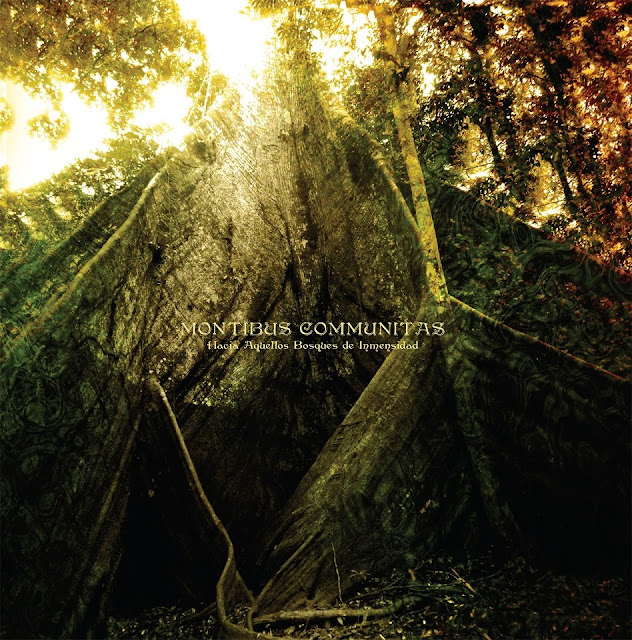 "Ah, they don't make them like this anymore." That was my initial thought when I first heard Montibus Communitas (rough translation - Mountain Community / Communities, from what I gather).
Fortunately in Peru they do still make them like this, and quite regularly too, this being one of many albums this spiritual collective have released recently - now available to a wider audience courtesy of this vinyl release from Chicago's esteemed tastemakers at Trouble In Mind Records.
The disclaimer "all songs were written while they were interpreted" is often a euphemism for "we all sound like we're playing different songs" or "I'm not sure what tuning he's in, so I'd better play louder than him", but to their credit, Montibus Comunitas have a sensitive, airy and subtle approach to improv that suggests if not exactly a communal mind, at least a shared devotional vision.
The results remind this listener of the more gentle communal psychedelia of early Amon Duul, although there's very little chance of anyone mistaking this music for a European export, with the predominantly acoustic instrumentation, particularly the violin and flute evoking vivid images of the surrounding habitat of their native valley outside Lima.
This isn't music that a written review can suitably communicate the purpose or effect of. Nor is it music that you can sit back and evaluate academically. Rather, it's meditative, visceral music that aims to communicate something of the natural wonder of it's surroundings by connecting directly on a spiritual level to the listener, and on that level it does exactly what it sets out to do.

Available on LP from Trouble in Mind Records here.