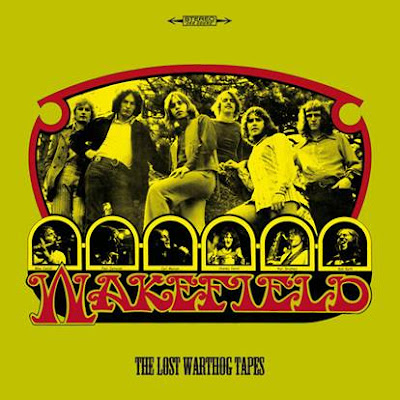 It was pretty hard deciding where to start with Guerssen and it's subsidiary label's September / October releases. Ten reissues, a number of which were entirely new to me. Old chestnuts like "embarrassment of riches" and "kid in a candy store" immediately come to mind. I eventually plumped for one of those unfamiliar titles, and one that wasn't released at the time.
Wakefield's "The Lost Warthog Tapes" represents recordings made between 1970 and 1972, which didn't see release until 2002 with a Gear Fab CD release, and this Outsider release is the first time these tracks have been committed to vinyl.
So, another early seventies psychedelic / progressive rock band that couldn't get a contract in their own time? "Big deal" you may think, but you'd be foolish to write this Colorado band off without a listen.
While the sound quality is at times slightly rudimentary, the songwriting and performances found here are anything but. It's a diverse mixture of sounds, bluesy guitar licks, more than a hint of U.K style proto-prog circa 1969, a little rural rock and even the odd latin influenced diversion, all tied together with exceptionally strong vocal harmonies. I'm not familiar enough with the band's history to tell you why this wasn't released at the time, but it certainly wasn't down to a lack of quality. The impassioned vocals, and gritty electric guitar workouts (think Stephen Stills) suggest that these tracks were never intended merely as demos, and the consistently memorable songs themselves prove that they could have been contenders.
Album stand out "Old Man" is a representative example - a lengthy piece which starts out as a particularly lovely, tight CSNY style harmony vocal showcase, before heading into more hard progressive territory, in a similar style to the mighty Banchee, and with arguably more convincing results than anything that group managed on their two official releases.
Very nice.

But it directly from Guerssen here.