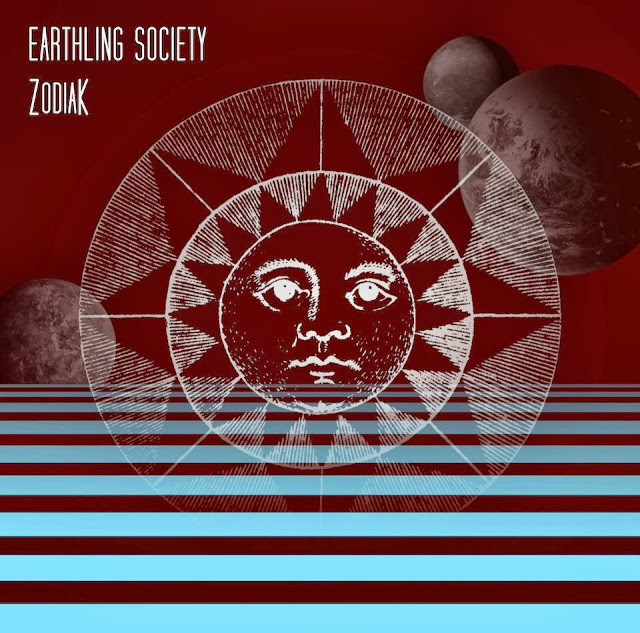 Now this review has been a long time coming due to a very simple (and slightly selfish) reason. Once I've reviewed something it tends to get filed away and not played anywhere near as often as it deserves (one of the cons of this particular job), and I've been reluctant to put "Zodiak" out to pasture.
If you've had any experience with Earthling Society in the past you know what to expect - mind altering space rock grooves at the heaviest end of the spectrum that you can reach without getting into that dubious stoner rock / space rock hybrid that tends to neglect the more psychedelic elements which are what I signed on for in the first place.
This is music tailor made for festivals (not necessarily in the now...), with the lengthier outings especially "Zodiak", suggesting that everyone at said festival ignored the warnings about the brown acid, and are now in thrall to some pagan power.  And nightmarishly hypnotic as it is at times, "Zodiak" knows when to ease back into trippy, spaciousness and give the listener a chance to catch their breath before having it taken away again. At 29 minutes, I often review albums that are shorter than this one track, yet there's not a wasted moment here, and the shorter tracks don't feel slight in comparison, with "I Don't Know Myself" mixing an early eighties Hawkwind influence with unexpected dub interludes.
Mind and taste expanding, "Zodiak" is thoroughly recommended to heads who aren't afraid to be taken on a journey that veers off the beaten track into unexplored and occasionally terrifying realms.

Available here on vinyl, here on CD, and digitally here.