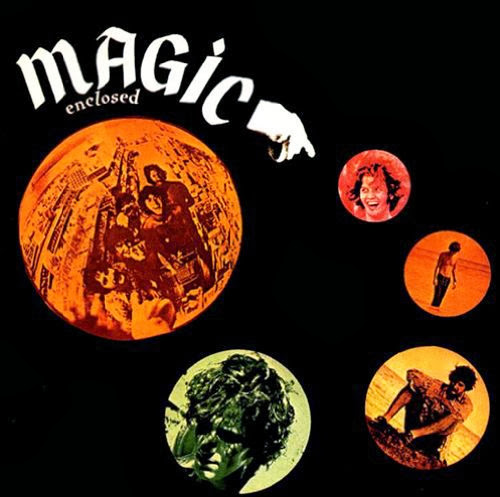 Back to the Guerssen / Out-sider reissues that we started looking at with Wakefield's "Lost Warthog Tapes" (back here), the next worthy release I'd like to direct you to is by Florida based rural rock outfit Magic.
Their first (and best) of two albums, "Magic Enclosed" was originally recorded in Michigan in 1969 and released on the tiny Armadillo Records label.
Long known to collectors, "Magic Enclosed" has a middling reputation which I'd blame on listener's preconceptions rather than the quality of the music contained within.
Truth be told that while every psychedelic rock bible worth the paper it's printed on classifies this as a psychedelic rock album, there's actually very little that I'd class as psychedelia present here. Which is not to say that it doesn't have exceptional period flavor (which it has in spades), but if you expect bucketloads of backwards guitars and the like, then you're likely to be disappointed. Magic instead rely on a gritty rural rock flavor, partway between Creedence Clearwater Revival and Canned Heat, and if you ask me that's a pretty good pedigree.
Opener "Keep On Movin' On" trades on a funky swamp rock backbeat that the Fogerty's would be proud of, and the high standard is maintained through six more short tracks that fine as they are, do nothing to prepare the listener for the closing behemoth "I'll Just Play" in which Magic do just that. Built on the scantest bones of a song, it's little more than a glorified jam really that somehow transcends it's loose origins and ascends into a "Down By The River" style dual guitar showcase that shows a delicacy of touch and a level of near telepathic cognisance between guitarists Duane King and Joey Murcia that is almost unheard of in guitarists not named Whitten or Young.
Marvelous stuff, and the rest of the album has plenty of choogle too.