White Hills "So You Are....So You'll Be" Review 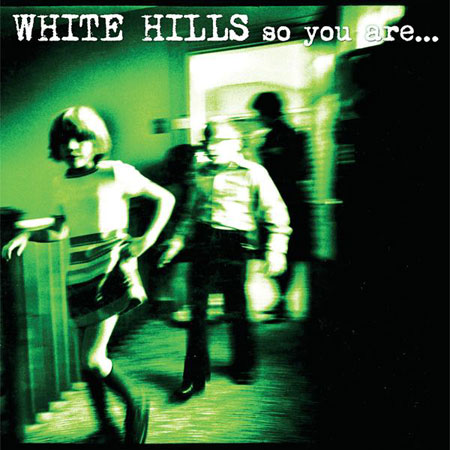 Too often the problem with space rock is its starry-eyed fixation with the past - guitar geeks who've spaced out to too many early Floyd records, standing gangly and lanking, resplendent in denim, languidly tweaking their pedals.
This is not the case with San Francisco's White Hills. They are hellbent on moving forward, expanding the lexicon of cosmic grooves in the process. On "So You Are, So You'll Be", they blend furious, barnstorming guitars with vintage electronics in an alchemical marriage of retro-fetishism and Sci Fi futurism.
White Hills are a progressive band. Not progressive in a Camel kind of way, but as in interested in their own progression. White Hills are hurtling forward like a frozen meteorite; they've released at least one album a year since their inception in 2005, with some years seeing two or even three releases. They just can't be bothered to repeat themselves. This is reflected in the songwriting on "So You Are... So You'll Be", which is a real sonic journey, alternating between analog electronic soundscapes followed by monolithic guitar riffs and punky drumming. This flows more smoothly than you might imagine, and it gives the impression of dreaming of life on Earth, while floating in a cold dead void. This record is bound to be a favorite amongst 'heads', recommended for headphone consumption, and bound to soundtrack many a late-night vision quest.
"So You Are... So You'll Be" could be the record that introduces the rock purist to the weird and wonderful glowing world of knob-twiddling and oscillator-fracking retro electronics, as all the rock elements are sturdy and foolproof, guiding the listener through the weirdness. The guitars are simple and stupid effective (engineered by Martin Bisi, of Swans/Cop Shoot Cop fame, so heavier than you might expect), while the bass plods pleasingly. The real ace in the hole here is drummer Nick Name, who plays fluently in at least three styles here, giving the album a real cruising velocity. The 45 minutes are gone in an instant, vanishing like a dream, moments after waking. The force of the rockers are cut by the analog atmospherics, turning this from a straight up Space Western into a weird psychedelic psychodrama, like something Ti West would make.
White Hills are a very, very prolific band. They churn out tons of records (that all have their moments), and live on the road (I recommend the live experience, if you get the chance). This combination is like candy for the seasoned psychedelic warrior, with a rich and vast world of sound to drown in. But for the uninitiated, "So You Are... So You'll Be" is a solid and satisfying listen, without a dud song in the bunch. A fine addition to an impressive catalog.
Recommended For Fans Of: Hawkwind, Voivod, Can, Neu!, Kinski, Acid Mothers Temple.

You can read more from Jason on his own Blog, Forestpunk here.