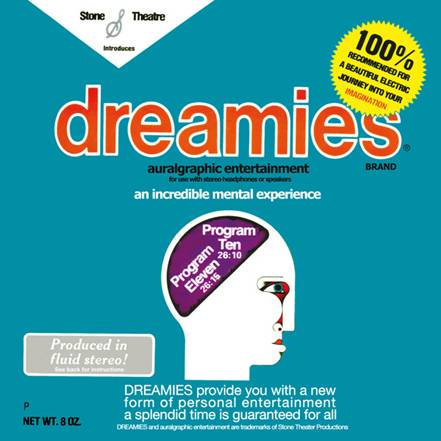 McKay's "A New Light Shines" (reviewed back here)  isn't the only gem Guerssen have in store for us this month.
Originally released in 1974, "Auralgraphic Entertainment" is certainly an odd album, but doesn't sacrifice melody for the sake of weirdness.
The legend goes that state employee Bill Holt hung up his suit in the early seventies and taking inspiration from the Beatles (specifically Lennon's experimentation on "The White Album"), bought himself an acoustic guitar, a four track and a Moog synthesizer and disappeared into his basement for 18 months, during which time he learned how to play the instruments and wrote and recorded the two side-long pieces that make up his only album.
"Program Ten" and "Program Eleven" (as they're called, presumably in reference to Lennon's "Revolution #9) are notably un-Beatlesque (not surprising - you don't just teach yourself to write tunes of that quality overnight), but do a better job of combining the experimental and the accessible than John ever managed (assuming that the studio trickery of "Tomorrow Never Knows" was the work of McCartney and the Abbey Road studio engineers as is widely believed).
"Program Ten" covers a lot of ground in it's twenty six minutes, but behind the tape splicing (featuring JFK,  Muhammad Ali and more), sound effects and burbling moog synth, lies a very simple, melodic folk song, built upon descending acoustic chords that cumulatively gather an irresistible hypnotic appeal.
"Program Eleven" tweaks the pop smarts even harder with moments of pure pop delerium bursting out unexpectedly between the psychedelic weirdness.
Intentionally esoteric, it's hard to know who will benefit most from this album - on the one hand, it's much too melodic for the experimental market, but on the other hand, more straightforward listeners will probably struggle with an album that's built on two twenty-six minute songs.
However, listeners like myself, who inhabit that grey area between these two extremes can rest assured that "Auralgraphic Entertainment" will make your mind boggle in the most pleasurable and melodic ways imaginable (and often unimaginable.)
Bill Holt, where are you now?

Coming soon on vinyl from Guerssen.

Get a taste of the wackiness here :