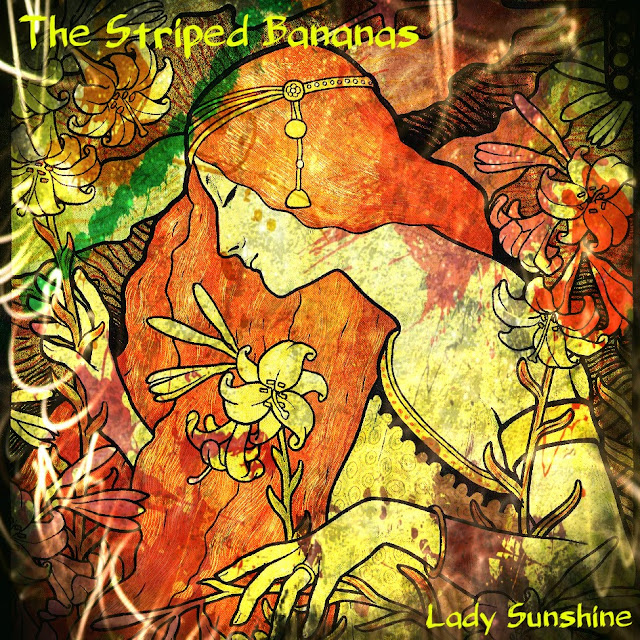 The Striped Bananas set the controls for the heart of 1967 and don't waste anytime getting there on their sophomore release "Lady Sunshine", an affectionate homage to the Summer of Love with just the right hint of impending darkness to balance out the unmistakable whiff of patchouli scented hippiness.
This Baltimore based three-piece make no bones about the fact that they were born in the wrong era. With a beautiful stained glass / art nouveau sleeve art that screams San Francisco, and a tracklisting that sounds like a bunch of Donovan outtakes, it's no surprise that period flavor is adhered to stringently, but what is surprising is that the songs and musicianship more often than not tick the right boxes too - style AND substance.
While the sleeve may leave you expecting some sort of San Francisco jam band explosion, the reality is more along the lines of the less instrumentally intricate and more song-orientated sixties West Coast outfits like the Peanut Butter Conspiracy, with a touch of "Butterfly" era Hollies creeping in on the more psych-pop inclined tracks, as well as the odd moment of garage fuzz that may not reach Seeds levels (few do), but are certainly reminiscent of early Electric Prunes.
You've already had a taste of "Dark Peace" on the Active Listener Sampler 11 - a melancholy acid folk ballad laced with sitar and unhinged backing vocals that give it a distinctly unsettling vibe, but there's plenty more to discover here, from the upbeat U.K psych-pop of "In the Garden" with it's unexpectedly moody minor key chorus, to the organ fuelled title track which rather unusually decides why settle for one chorus when you can have two? Or at least has a pre-chorus strong enough to qualify as a chorus in most people's books.
Not startlingly original, but that was never the intention of course. The Striped Bananas instead offer an affectionate tribute to their favorite era, and hit all of the right spots to leave this listener with a warm nostalgic glow.

Available as a free download from their Bandcamp page here: