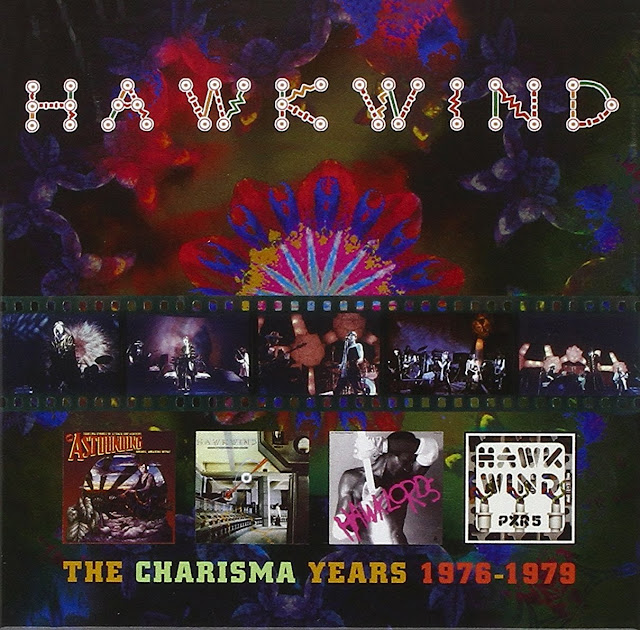 This latest box set from Hawkwind specialists Atomhenge collects the four albums Hawkwind released for the famous Charisma label between 1976 and 1979.

Lemmy had just been ousted from the band and the emergent punk scene viewed Hawkwind with distaste, distrust and perhaps worst of all, disinterest. Prog was the enemy and Hawkwind was lumped in with the other dinosaurs, never mind the fact that Lemmy was busy reinventing heavy metal by imbuing it with the most punk of attitudes in his new band Motörhead.

Given this attitude and the fact that this era is regarded by some as the beginning of the band's decline, you'd be forgiven for not expecting much from these albums. Truth is though, it was a second golden period for a band that continued to innovate and shift with the times. "In Search of Space" this is not - but in its own way it's every bit as vital.

First up is "Astounding Sounds, Amazing Music", a transitional effort that sees the band beginning to venture beyond its space-rock roots with fascinating results. It's not always 100% successful but it is always interesting and there's a visceral thrill involved in hearing the band stepping out of their comfort zone. Robert Calvert returns, but is not yet the dominant force he would become on the following three albums, here sharing the limelight with Nik Turner and Dave Brock on roughly equal terms. There's even an attempt at a hit single on the David Gilmour produced "Kerb Crawler", which gives a hint of things to come. 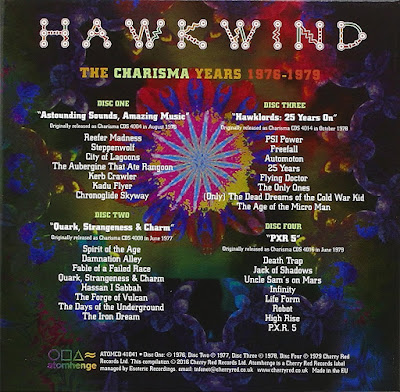 "Quark, Strangeness and Charm" followed in 1977, and is rightfully regarded as one of the band's very best albums. It's certainly one of their most focused as well. Nik Turner had stepped aside by this point allowing phenomenal violinist Simon House a chance to shine. House's playing on atmospheric middle-eastern prog gem "Hassan I Sahba" may well be my favourite single Hawkwind studio moment. It's no wonder David Bowie stole him away in the night for his band. Elsewhere "Quark, Strangeness and Charm" continues the band's move towards more concise, tightly structured songs. The title track, "Spirit of the Age" and "Days of the Underground" are among the band's most memorable songs and in a slightly quirkier world could have been hits on the pop charts.

"25 Years On" and "PXR5" continue in this vein, embracing a surprisingly forward thinking proto-new wave sound, without ever allowing you to forget who you're actually listening to. The songs aren't quite up to the material on "Quark, Strangeness and Charm", but they're not too far off.

"25 Years On" is sure to appeal to those who enjoyed "Quark, Strangeness and Charm" and is one of the band's most varied and mellow releases. I hadn't heard this for many years, but it's aged marvelously and I was quite taken aback by just how good it now sounds - partially down to the excellent mastering job present on all of these discs, but also a testament to the quality of the material and the original production job. Opener "Psi Power" is the album's catchy single, but the album tracks following provide the album's real substance. "Free Fall" is a lovely, mellow number with burbling vintage synths with a definite BBC Radiophonic Orchestra vibe - quite an unexpected treat. "Flying Doctor" on the other hand is well established as a love it or loathe it piece for Hawkwind fans. It certainly pushes all of the right buttons for me, one of the catchiest tunes the band ever produced, in spite of / because of its repetitive nature. "(Only) The Dead Dreams of the Cold War Kid" is the other big highlight here, a great Calvert tune with some more excellent Harvey Bainbridge synthwork.

Lastly, "PXR5" was recorded prior to "25 Years On", but held up for over a year due to legal issues - issues that were serious enough to briefly necessitate a name change to the Hawklords for the release of "25 Years On". A seamless mix of studio and live recordings, "PXR5" is front loaded with two of the band's catchiest new wave pop songs with "Death Trap" and "Jack of Shadows", before plunging into deeper waters with fan favourite "Robot" and one of Calvert's finest moments, "Uncle Sam's on Mars".

If you want the bonus tracks from Atomhenge's deluxe reissues you'll need to buy these individually, but undiluted by add-ons, the 'vanilla' reissues containe within this box are, as far as I'm concerned, the definitive argument for this brief time period under Calvert's guidance being among the band's very best. And there's plenty more worth investigating just beyond the horizon, particularly 1980's excellent "Leviation" (a return to the band's earlier space-rock sound, featuring Ginger Baker on drums), as well as a pair of fascinating synth driven albums recorded for the RCA Active label which we'll hopefully have the opportunity to cover very shortly when this set is released. Stay tuned!