The Green Pajamas - Summer of Lust 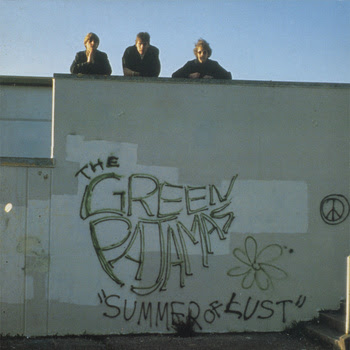 Recorded back in 1984 on a four track in Joe Ross' parent's attic, this is something of a holy grail to Green Pajama's fans.
Their first ever release, this was recorded shortly after Jeff Kelly and Ross met at a party and bonded over an anachronistic ( at the time )  love for the Beatles "Rubber Soul" and "Revolver". It came out on cassette in 1984 and was then released in the UK on vinyl in 1989, but has been unavailable and largely unheard since.
Green Monkey Records have come to the rescue again with the first ever CD release, which includes a couple of excellent bonus tracks and cleaned up sound courtesy of Tom Dyer.
As is often the case with 'lost' albums, "Summer of Lust" has developed a pretty stellar reputation, so I was semi-expecting this to be a case of absence makes the heart grow fonder. It turns out however, that this is one lost classic that deserves the label. Right from the very first track, "Katie Lied" it's obvious that Jeff Kelly's melodic gifts were already at their peak.
The primitive recording conditions have aged "Summer of Lust" nicely too - without all the mod cons a fully kitted out studio in 1984 could provide this sounds more contemporary than it's followup "The Book of Hours" and could conceivably have been recorded at any point between 1966 and now, which is all part of the charm.
The Beatles influence shows up on a number of tracks especially "Green Pajamas" which ends with a repeated mantra ala "Hey Jude", although "Mike Brown" shows that the Kinks were also on Jeff Kelly's radar at this point.
Joe Ross meanwhile turns in a great selection of songs which are indebted to the more adventurous side of U.K psychedelia and are more willfully wyrd. Their songwriting styles are in stark contrast but compliment each other perfectly, giving a nice balance to the early Pajama's albums which was missed a little when Ross left.
The sleevenotes with recollections from Joe Ross and Tom Dyer make fascinating reading too.
A roughly hewn but addictively melodic gem.
Buy Summer Of Lust On CD Here