The Paperhead - Pictures Of Her Demise 7" 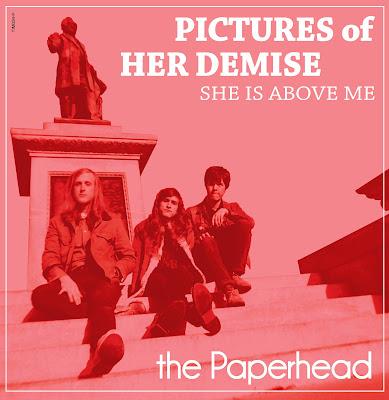 Reviewed by The Active Listener.

Contrary to what your ears will be telling you, these guys aren't a long lost English psych band from 1968. They're actually three young Texans with an average age of around twenty.
Having already heard the Paperhead's self titled debut and their earlier album as the Looking Glass I had a pretty good idea what to expect from this 7", and the key elements of their sound are still very much in place here. Syd Barrett era Pink Floyd, July and the Move still seem to be the main influences, but what I didn't expect was how well their material would translate from the album medium to 45rpm.
Where the Paperhead's album tracks often branched out into more experimental and challenging areas, they've managed to trim back all the excess for these two tracks resulting in two concise, catchy but still delightfully weird psych pop nuggets which show that they've learned a thing or two from the Idle Race amongst others.
Big choruses, guitars straight out of the Move's Fire Brigade and a mix which would make you swear Norman Smith was behind the desk
Definitely my cup of lysergic tea.

You can buy the 7" with a free mp3 download directly from the label, Trouble in Mind Records here for $5 U.S.

Still not convinced? You can hear "Pictures of Her Demise" on this cloudcast - "The Now ( And Not So Now ) Sound of Psychedelia".