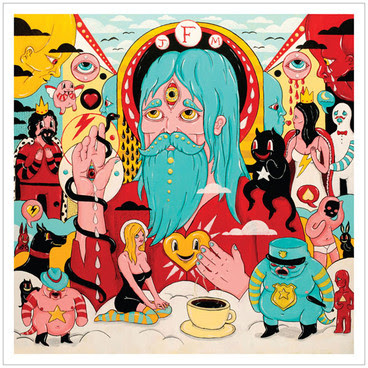 Reviewed By The Active Listener (7/10)

With seven albums already behind him it's got to be a little frustrating for J. Tillman that he's still most well known as the Fleet Foxes harmony-singing drummer.
All that should be set to change now with the release of "Fear Fun", his first release since quitting the Fleet Foxes, and first under his new moniker of Father John Misty.
Whereas his earlier albums were generally very intimate, they often suffered from feeling more like fragments than fully formed songs, and lacked the hooks that his songwriting mentors come up with on a regular basis.
The last couple of years in the Fleet Foxes however seem to have taught Tillman a thing or two about songwriting and dynamics, as "Fear Fun" is undoubtedly the most fully formed work he's come up with yet. Having Jonathan Wilson on hand to produce doesn't hurt either, I'm sure.
Lead off single "Hollywood Forever Cemetery Sings" may be one of the album's most immediate tracks, but it's not really a good indicator of what to expect to find here. While the album as a whole is pretty dark lyrically, the majority of tracks are musically handled with a much lighter touch than "HFCS".
There are traces of Fleet Foxes in the harmonies on tracks like "Only Son of the Ladiesman", but the sound is generally more geared towards the early seventies Laurel Canyon sound.
There are a few notable exceptions where Tillman is more explicit with his influences. "I'm Writing a Novel" is "Subterranean Homesick Blues" reinterpreted by J.J Cale. "This is Sally Hatchett" is "White Album" era Beatles with slashing electric guitars and a big string crescendo. "Well You Can Do It Without Me" is Randy Newman singing the Kinks " Acute Schizophrenia Blues".
It's a very consistent album, which is it's only real failing - it could do with a couple of really strong songs to take it to the next level, but for the meantime this will keep me going until the next Jonathan Wilson album emerges.
You can stream the whole album below, courtesy of Sub Pop.
Buy Fear Fun on CD Here.