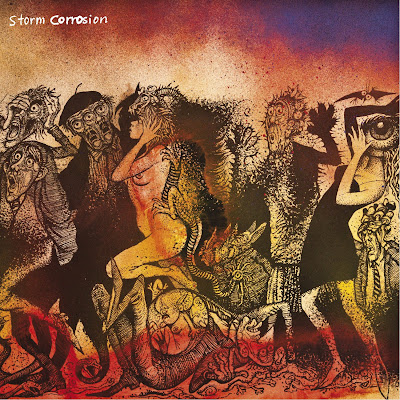 Taking a step further away from  Opeth and Porcupine Tree, Storm Corrosion gives Mikael Akerfeldt and Steven Wilson a chance to record something a little different without the expectations attached to their day jobs.
Those who've been unhappy with Opeth's evolution away from metal will find little to love here admittedly, but those who've embraced Akerfeldt's more eclectic approach recently have plenty to reward them.
Not usually happy to use one riff where twenty will do, this shows remarkable restraint on both Akerfeldt and Wilson's behalves, with a much more measured and streamlined approach than either of these two are accustomed to.
The title track for example is built upon pastoral woodwinds and a simple, minor-chord acoustic guitar motif which is repeated in a patiently hypnotic fashion which wouldn't get a look in for more than a few bars on an Opeth album.
Elsewhere there are walls of mellotrons that would make King Crimson proud, the odd tasteful guitar solo, lots of melodic piano, sinister Italian horror film burblings, clever pieces of multi-tracked choral vocals and in Drag Ropes an epic, but understated suite that points at a very interesting future if they continue to follow this path.
These two have made it to the point where they can make the record they want to make without constraint and I suspect that there's more to come along these lines from them. I certainly hope so.
Storm Corrosion mostly defies categorization, and is all the better for it.
Pastoral  progressive orchestral chamber horror choral folk? Why not.

Check out the stunning video for Drag Ropes: