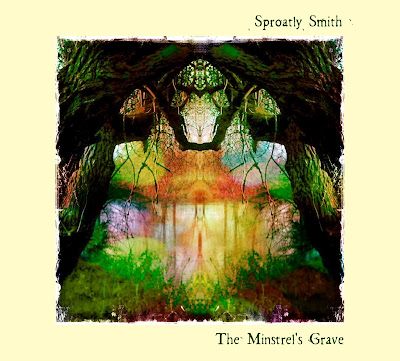 Album number three from Sproatly Smith sees them signed to Folk Police Records, and to celebrate their newfound opportunity for a bit more exposure they've sensibly released their best album to date.
Ostensibly a folk act, they push the envelope in so many different directions that it seems unsporting to try and pin a label on them. The approach is similar to Active Listener faves The Hare & The Moon, although they largely eschew their sinister tendencies in favor of something much warmer and a whole lot more more psychedelic.
Opener, "My Mother Said" bears the influence of the Ghost Box label - an organic music box of appealing found sound montage, overlaid with a simple, haunting vocal melody.
Elsewhere acoustic guitars and other stringed instruments intertwine with lovely dual female vocals on "O Death", a song I've previously only heard performed by grizzled old men. The psychedelic slide guitars sound like something from a late sixties Pink Floyd record. There's also an unlikely, but triumphant acid-folk interpretation of the Pretty Things heavy psych behemoth Death (from S.F Sorrow) which is somehow more psychedelic than the original despite relying mainly on acoustic instruments and crystalline female vocals.
Add to this a lovely Maddy Prior cover, a heavy rock detour of wailing guitars built upon crate-digging drums, and in Elysium, a piece of musique concrete that wouldn't be out of place on a Moon Wiring Club album - this clearly isn't your Dad's folk music.
But it's Blackthorn Winter, one of their originals, that is the true highlight - a slow building epic with ritualistic percussion and some fine textural sitar work.
It's strange and beautiful stuff - wyrd-folk is heading in completely unexpected directions, and Sproatly Smith are setting themselves up nicely as one of the innovators at the forefront of the movement.
Buy The Minstrels Grave On CD Here Or In MP3 Format Here.