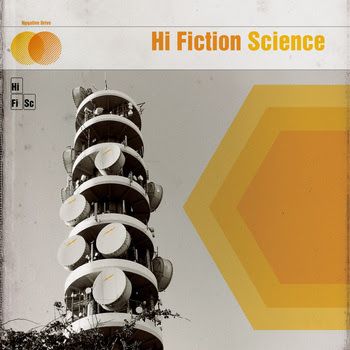 Reviewed By The Active Listener (7/10)

Bristol's holy triumvirate of Tricky, Portishead and Massive Attack seem to have completely blinded people to the fact that other types of music are made in the area, and judging by Hi Fiction Science's self titled debut, made rather well too.
Released last year but only just brought to my attention, Hi Fiction Science is an easy album to play pick the influences with, but due to the diversity of those influences is pretty difficult to actually describe.
They're cut from the same cloth as the Soundcarriers but unlike them, they don't sound like their musical education ended in 1969. So, where the Soundcarriers mix psychedelia, folk rock, krautrock, library music and 60's girl-group pop into their delightfully diverse melting pot, Hi Fiction Science also manage to find room for some exquisite shoegaze guitars and in Kosmonaut's tight hi-hat and sampled eastern strings, a nod to their Bristol trip-hop forbears.
Vocalist Maria Charles is the first component of their sound that you'll notice, able to channel the wistful and pure girl-folk twang of Jacqui McShee one moment, full of the attitude and grit of Elastica's Justine Frischmann the next.
Despite this, it's often the instrumental moments that find the band sounding their most confident. The soaring e-bowed guitars of Zabriskie are particularly lovely, and the rhythm section are inventive and rock solid throughout.
There are a couple of times where the band's diversity hamstrings them a little, with the fast rock intro of Undulating Blue sounding a little forced, and occasionally the band play too much of a supporting role for Charle's voice, but these are minor quibbles and on the whole this is a confident debut from a band that have the potential to go far.
Check out a couple of their strongest tracks here: You Can Buy Hi Fiction Science Digitally Here