Weirdlore - Notes From The Folk Underground 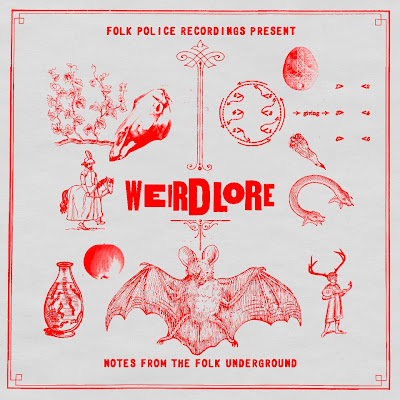 Soon to be released by the fine people at Folk Police Recordings, "Weirdlore" is a companion piece to the upcoming Bristol based festival, but is much more than your average rush released cash-in.
Weirdlore is considerably more than the sum of it's impressive parts. Expertly compiled and sequenced, it does for the current underground U.K folk scene what "Dark Is The Night" did for the American indie scene several years back.
Alasdair Roberts is probably the biggest name here and he acquits himself admirably with his impeccable, individualist vocal phrasing and hypnotic fingerstyle guitar.
As with "Dark Is The Night" though it's the less celebrated names that provide the highlights.
"Worship of Trees" by Telling The Bees sounds like a pagan Hawkwind left to their own devices in the woods, and features some exceptional violin work.
The Straw Bear Band's "Black Hive" is unsettling psychedelic folk of the highest order.
Starless and Bible Black's "If You Fall, I'll Fall With You" features interweaving acoustic guitar parts, the like of which I've not heard since Bert and John in their prime, while the False Beards' "Marie Celeste on Down" sounds like it was recorded a hundred years ago, in the best possible way.
Elsewhere Nancy Wallace stirs the heartstrings without getting saccharine on the quirky "Walking into Walls" while Boxcar Aldous Huxley's "Hora" alternates from sounding like something from a mid eighties Tom Waits album to a gypsy jazz take on "Trout Mask Replica".
It may be the final song "Pucelancyrcan" from Wyrdstone that illustrates the compilers intentions best though, effortlessly combining ancient sounding field recordings, with moodily arpeggiated guitars and pipes, all awash with a gentle psychedelia.
An impressive snapshot of a scene that's never been stronger or more diverse, this is essential listening for the adventurous folker with a taste for the unusual, and one of my very favourite releases of the year so far.

You can pre-order it here on CD.