Sky Picnic - Farther In This Fairytale 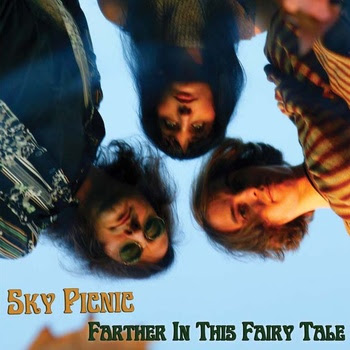 Reviewed By The Active Listener (8/10)

Brooklyn's Sky Picnic have been around for a little while, with their "Synesthesia" E.P being released in 2008 along with several fine single releases and then in 2010 their debut full length "Farther In This Fairytale".
German label Nasoni picked up the rights for "Farther In This Fairytale" last year and released it on vinyl, and better late than never I stumbled across their bandcamp page last week and have been playing "Farther" pretty much on a continuous loop since.
Unlike the majority of modern psychedelia which generally shows the influence of more recent musical developments, drone and shoegaze in particular, "Farther In This Fairytale" gives one the impression that the members of Sky Picnic have never listened to an album recorded after 1972.
This is blissfully pure psychedelic pop / rock with an unescapeably English twinge and just the right amount of progressive rock thrown in for good measure. "Hide & Seek" is a dead ringer for Kaleidoscope - think "(Further Reflections) In The Room of Percussion" or "Flight To Ashiya" and you're on the right track.
Elsewhere there's plenty of traces of the more exploratory side of Syd Barrett era Pink Floyd, although the seagull guitars and keyboard interplay more often sounds like the live material the Floyd were working on in 1969 that can be found on bootlegs like "The Massed Gadgets of Auximenes".
There are even a few acoustic moments that should be quirky enough to satisfy even the most picky Incredible String Band fan.
The album's centrepiece is the sprawling "The Universal Mind Decoder", an adventurous multi part suite which mixes thrilling psych pop with experimental flights of fancy guaranteed to politely blow minds.
Available on vinyl and MP3 here.  Stream the album below.

Keep your eyes peeled for an interview with Sky Picnic's Chris Sherman in these hallowed pages very soon.